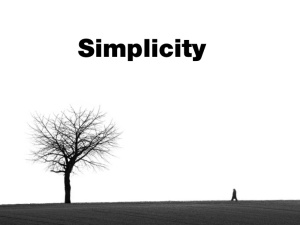 In the early 2000’s I became increasingly intrigued by the biblical theme of simplicity. Actually it began much earlier than that, probably way back to my fascination with the hippie lifestyle in my teens. Then in the 80s I read Celebration of Discipline by the Quaker writer, Richard Foster. His chapter on Simplicity called to something inside me. Some years later he wrote an entire book on the subject called, The Freedom of Simplicity. I was stoked to see that simplicity wasn’t just for hippies and that a value I’d carried since my youth was a biblical value and one that could/should be cultivated in my life.

By 2006 or so I couldn’t hold it in any longer, I studied the Scripture on the spiritual value of simplicity and gave a series of messages on the subject. I can’t say that it was particularly well-received by our predominately white middle class church, in fact, I got a fair amount of push back on some of the things I taught. But I can’t blame my friends since our culture has so consumed us with consumption, and made our Christianity more complicated than it was ever meant to be. I think the Church has been sort of hijacked by consumption, complexity, and clutter; and identifies more with the American Dream than with God’s.

By the way, I should say that when I first embarked on this study I had no idea that I was about to embark on an involuntary simplicity journey in my own life when 7 years ago I lost most of what I had – my marriage, my ministry, my income, my health and health insurance, and then later, almost all the money I had in the world. I’m not complaining or whining about it nor am I fishing for sympathy, ‘cuz I’m doing quite well, and enjoy the very full life I have these days of a simple, single life of service in San Francisco.

Simpler isn’t the same as easier – a point I’ll unpack throughout this series. Though simpler, in many ways, my life is more difficult. Swimming against the current in culturally toxic culture is like picking a fight with entropy. Since cluttering is usually easier than decluttering, we might consider having a more grateful attitude when we’re cornered into an unplanned, and at first, an unwelcomed, simplification. It’s one of things that make a life with God such an adventure!

In this post I’m “simply” offering an outline-ish form of a brief podcast talk that you’ll find on Soundcloud. I hope you’ll take the time to give it a listen. But even if you don’t, this will provide a primer on the subject. This introductory post and the podcast will be followed up with a number of others on the subject. I hope they’re helpful to you and influence you toward a simpler lifestyle and walk with Jesus.

Ecclesiastes 7:29 God made man simple; man’s complex problems are of his own devising… (Jerusalem Bible)

Matthew 18:4 Therefore, whoever humbles himself like this child is the greatest in the kingdom of heaven.

Philippians 3:13 Brothers, I do not consider myself yet to have taken hold of it. But one thing I do: Forgetting what is behind and straining toward what is ahead,

Galatians 5:6 For in Christ Jesus neither circumcision nor uncircumcision has any value. The only thing that counts is faith expressing itself through love.

Psalm 27:4 One thing I ask of the LORD, this is what I seek: that I may dwell in the house of the LORD all the days of my life, to gaze upon the beauty of the LORD and to seek him in his temple.

Where do I begin to simplify?

Some suggested reading on the simple life:

The Celebration of Discipline and The Freedom of Simplicity, by Richard Foster

Free: Spending Your time and Money On What Matters Most, by Mark Scandrette

To fill in the “blanks” go to the podcast message by the same name:  Introducing Simplicity

One Reply to “INTRODUCING SIMPLICITY”