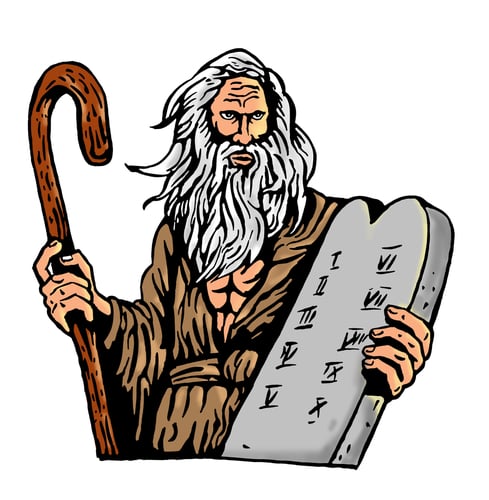 With his laws, God intended to transform people, who had been slaves for 400 years, into sons and daughters. Making sons out of slaves would be no easy task. It was one thing to get Israel out of Egypt and quite another to get Egypt out of Israel. For nearly twice as many generations as we have called ourselves Americans, the Jews had been programmed to think and act like slaves. God had no intention of relating to his people in a slavish way. He wanted them to know him as his “own people,” as a family with a Father. In their miraculous deliverance from their captors he’d shown them how formidable he was. Then he gave them his laws to show them how fatherly he can be to those he’s delivered.

I propose that one – often neglected – aspect of God’s laws, his Ten Commandments in particular, is their purpose of training his people to abandon our slavery and embrace their sonship. These laws, that someone called, “The Ten-der Commandments,” are our family manifesto. They were originally intended to set us free from bondage and teach us how to live a lifestyle befitting members of God’s household. How else could James (1:25) call the Law, “the perfect law that gives freedom”? The Ten Commandments were (and are) sort of a ten-fold antidote to a spirit of slavery, which, of course, in order to be fully activated, required Jesus’ redemption and the Spirit’s revelation:

For those who are led by the Spirit of God are the children of God. The Spirit you received does not make you slaves, so that you live in fear again; rather, the Spirit you received brought about your adoption to sonship. And by him we cry, “Abba, Father.” The Spirit himself testifies with our spirit that we are God’s children. Now if we are children, then we are heirs—heirs of God and co-heirs with Christ, if indeed we share in his sufferings in order that we may also share in his glory. Romans 8:14-17

Ironic, isn’t it, that since way back when these laws were instituted, people have shape-shifted them into a form of slavery in themselves? It reminds me of how many have used the prayer that Jesus taught as an alternative to “vain repetition” as a pretext for repetition (Matthew 5). I propose that one of the reasons the commandments were originally given as an alternative to slavery, not rules for a new form of it. For 400 years the Jews had learned how to act like slaves to an evil dictator, when a benevolent Ruler rescued them and provided for them a pathway to unlearn a spirit of slavery and learn a spirit of sonship.

God rescued his people for the purpose of relationship.

‘”You yourselves have seen what I did to Egypt, and how I carried you on eagles’ wings and brought you to myself. Now if you obey me fully and keep my covenant, then out of all nations you will be my treasured possession. Although the whole earth is mine, you will be for me a kingdom of priests and a holy nation.’ These are the words you are to speak to the Israelites.” Exodus 19:4-6

“The Lord your God, who is going before you, will fight for you, as he did for you in Egypt, before your very eyes, and in the wilderness. There you saw how the Lord your God carried you, as a father carries his son, all the way you went until you reached this place.” Deuteronomy 1:30-31

God’s laws are rules for relationship. He set them free and then gave them laws to keep them free, in a similar way that America’s founders gave their newly liberated citizens a Constitution to govern their freedom.

Rather than initiating fear, his laws are meant to quell our fears. They were designed to protect us from the sin that threatens to destroy us. They’re like traffic laws that keep us out of dangerous, and potentially fatal, trouble. It was this understanding of the Law that inspired David – the most New Testament of all the Old Testament believers – to say, “I love your commands more than gold, more than pure gold,” (Psalm 119:127) and John to write: “This is love for God, to obey his commands, and his commands are not burdensome” (1 John 5:3).

OK, I admit that this is simply intended to provoke you to your own further research of what I call: “The Law in the life of the New Testament believer.” And surprise, surprise, I have a primer on the subject that might help you take a first step in that research at barneywiget.com called, “The Lord, His Law, and Those Who Love Him.”