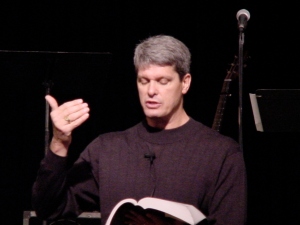 By “Preacher Talk,” I’m not talking about pronouncing “God” like it’s spelled “Gaaaawwwd,” or about that practice of adding an extra breath-syllable to the end of each phrase: “God is good–huh! His Word is true–huh! Let’s do his will–huh!” Then there’s that certain preacherly tone that sounds like no one ever talks in real life. I’m not talking about pronunciation or a tone or style.

What I mean by “preacher talk” is the cliché-driven kind of Christianity that preachers often inadvertently espouse when we give our messages. It’s the happily-ever-after-Christianity where everything always works out in this life for everyone that believes and acts right. I’m talking about the formula-driven spirituality that says if we do such and such, God will most certainly do so and so. It often comes out in sermons in terms like, “God always…” and “God never…”

In my own times of suffering (as well as in observing the sufferings of others), I’ve come to doubt that God is as predictable as I once thought. I don’t know that we can say with confidence that God always or never does anything in particular. Sure he never lies or sins, and he always loves. But as for things in particular, I’m not so sure that we can with confidence say that God will do this or that; or that God would never do something like that or this.

I know I sound a bit cynical, and I don’t deny picking up some cynicism along my road of difficulty. Nevertheless, my honest study of Scripture has yielded the same suspicion, if not an irritation, about trite promises made by us preachers that God will always do one thing and never another. It’s clear from the Bible that God is faithful. There’s no way to read his Word and come to any contrary conclusion. But preacher talk turns makes the terms “faithful” and “predictable” interchangeable. That is, because we can count on him it follows that we can always count on him to do things the same way he always does them. I’ve come to believe that he’s faithful in his character, but not the least bit predictable in how he chooses to express his character.

Oh, the depth of the riches of the wisdom and knowledge of God! How unsearchable his judgments, and his paths beyond tracing out! “Who has known the mind of the Lord? Or who has been his counselor?” “Who has ever given to God, that God should repay him?” For from him and through him and to him are all things. To him be the glory forever! Amen. (Romans 11)

C.S. Lewis (whose writings include a distinct lack of “preacher talk”) seemed to have had a similar understanding of God when he wrote The Chronicles of Narnia. The Jesus character is a fierce lion named, Aslan, whose most notable characteristic was his unpredictability. He seemed capricious, almost fickle at times. He would show up sometimes and save the day, and at others he would wait until the bad became even worse. Or he would only show himself to one person and remain invisible to the rest.

One of the characters asked another about Aslan, “Is he safe?”

It’s hard for us to live with mystery, enigma, and paradox. We seem to allow for very little wonder in our modern lives. Everything needs to be nailed down, have clear explanations, and fit a pattern. On the contrary, living a life of faith includes accepting the ambiguity of God and his ways. He’s just not that nail-downable!

Faith doesn’t mean that we have God all figured out, it means that we can live with him without having him figured out. We should expect the best from God, and yet be prepared for the possibility of the best being something other than what we expected! He is God after all, and we’re not. He doesn’t work for us. It’s the other way around. He doesn’t always do what we want him to, and he has his reasons (I guess). He sometimes answers our prayers and even our questions. But God didn’t send his Son into the world to explain stuff to us, but to save us!

This is why we shouldn’t reduce our faith to clichés and trite talk about God. We shouldn’t make promises to others about what God always or never does. Tell them in plain talk (as opposed to preacher talk) that he’s the faithful God of mystery and wonder. His paths are “beyond tracing out,” so try to keep your eye on him and follow him the best you can.

2 Replies to “Recovering from Preacher Talk”