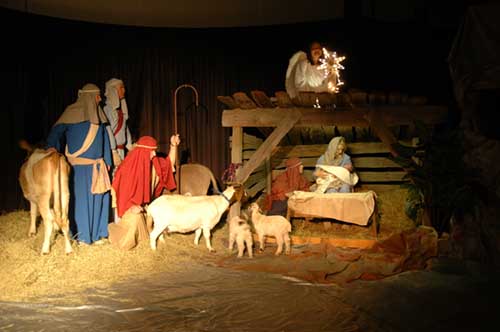 I used to like live nativity scenes. In my last post I told why I say, “used to.” But did you know who first thought up the baby Jesus scene with real animals – I mean, the second one after the first one? It was Francis of Assisi in 1223 on Christmas Eve in a cave outside a tiny town 60 miles south of Assisi, Italy. Legend has it that Francis found a mother who had just given birth, a proud father, and an infant. Beside them he assembled a cow, a donkey, and probably a goat, a chicken, and whatever else he could find to lend authenticity. Allegedly Francis preached about the humility of God and the connections between all of us. “The night was lit up like the day, and it was delightful to both humans and animals.”

I run the risk of some of my more “conservative” friends thinking I’ve gone around the bend by recommending reading on the thoroughly Catholic Francis of Assisi. Whatever my fascination for him and others of his ilk – which has only increased over the last decade or so – says about my own spirituality, I’m not ashamed of it. Though I’m not praying to Mary or going to confession any time soon, I am intrigued and inspired by the ways of this man that some people still call, “The last Christian,” and by the way, with the current Pope who took the name of the so-called saint. Though it’s not for me to say, they both seem like the real deal to me.

It was news to me that more books have been written about this simple saint that only lived to forty-six than about any other person in history except for Christ. Having read the two books I’m recommending here helps me understand why. Whether or not you’ve read one or many more of the literally hundreds of biographies of his life, I recommend one or both of these.

Jon Sweeney said of Francis: “This ordinary guy began hearing God talking. That made him think he might be crazy. Maybe he was. But it turned out to be a good kind of crazy.” In that case, Lord, make me that good kind of crazy!

This fictional story is a fun and easy read about how Francis’ story impacted a disillusioned and burned out pastor (something to which I can easily relate) when he went to Italy for a sabbatical and journeyed with a motely group of friars whose simple love for Jesus reignited his own relationship with God. He weaves the actual story of Francis into the fictional narrative of a mega-church leader in need of renewal.

I like his description of Francis as “a Catholic, an evangelical street preacher, a radical social activist, a contemplative who devoted hours to prayer, a mystic who had direct encounters with God, and someone who worshipped with the enthusiasm and spontaneity of a Pentecostal. He was a wonderful integration of all he theological streams we have today.”

He tells about how Francis went out and asked people to donate stones to rebuild the San Damiano chapel and then commented, “It’s a pretty incredible metaphor. I’ve been wondering what stones the Church is going to need today to build a Church that reaches postmodern people. It’s going to take everyone bringing their own unique stone to get it right.”

He tells how Francis called his brothers, “Jugglers for God” and “Itinerant Minstrels.” He quotes Francis – “Who indeed are God’s servants, if not minstrels who seek to move men’s hearts in order to lead hem into the joys of the Spirit?”

Lastly, “We need an aperture-opening experience, to be plucked out of the weeds of our narrow, self-centered faith and shot up fifty thousand feet so we can look down at what it means to be a follower of Jesus.”

When Saint Francis Saved the Church: How a Converted Medieval Troubadour Created a Spiritual Vision for the Ages, Jon M. Sweeney

Sweeny says his is a book “about how well-meaning Christians almost killed the faith eight hundred years ago. And Francis of Assisi saw it coming and turned everything around. In many ways, he was an extremely normal guy. I mean, he had father problems, woman problems, expectations-of-others problems, but one day he began to listen more carefully to what his heart told him despite and beyond those problems. And as he got better at listening to his heart he realized that he was hearing Godthere.” And then Sweeney shares how the Church (Catholic and not) needs to be saved by a similar vision today.

Here are a few of my favorite quotes from the book:

“If you invited Francis to tea, he would likely insist on first standing out by the road to beg for his biscuits from passers-by, before joining you inside. His clothes would be ragged and dirty since he had little concern for presentation. Your neighbors would stare. They’d think you were hanging out with bums or inviting lunatics for a visit.”

Like I said, may my brand of faith be the Francis brand.

“We may think of saints as aloof or mostly alone with God, but not this one. He became a saint through friendship.”

I like this part of his saintliness. He had neither a dour demeanor nor an unsociable bone in his body. He loved people and most people loved him.

If you have a favorite Francis quote, story, or biography, we’d love to hear it…

3 Replies to “The founder of the live nativity scene”