If the math of “6 of 5ish” doesn’t quite work for you I can only say that I take pride in the fact that it hasn’t exceeded 6! I just wanted to summarize this rather lengthy and straight forward series.

I said way back in the beginning that I would be making an appeal for a more Christ-centered, less entitled, and generous sort of Christianity. I’ve proposed that many Christians have settled for a shallow and self-absorbed brand of spirituality and as a result are bored of their diet of “simple manna” and therefore demand from God more than he promises (at least in this world). As harsh as it sounds, my take is that many Christians are overfed, underchallenged, and spiritually sick. 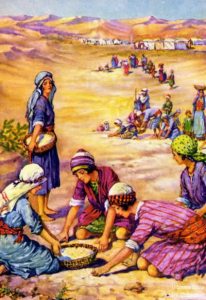 To my mind, the “manna” story not only serves to point this out, it offers us a way out of this unhealthy cycle. The solution is to “eat the flesh” of the Man from Heaven (John 6), to ingest him, to take him inside so he can live his supernatural life in and through us. If our Christianity is lacking it’s most likely because it doesn’t have enough Jesus in it. We mustn’t memorialize what we possessed of him yesterday. Yesterday’s manna will not do for today, nor today’s for tomorrow. A regular routine of eating followed by sleeping with no working in between dooms us to spiritual obesity. Spiritual vitality requires a daily intake of the Person of Jesus and then living each day in the nourishment he gives to our spirit.

One inevitable consequence of a meager diet of the Heavenly Man(na) is a lust for more than mere manna – that is, a demand for “meat.” As the Jews were misled by the spotty spirituality of the “mixed multitude” into feeling entitled to something “more” than manna, so there is a “critical mass” associated with the Church who expect something more satisfying than Jesus. Their voice is deceptively inspiring and mustn’t be trusted or followed.

“More satisfying than Jesus,” that doesn’t easily roll of the tongue. It’s actually painful to say that there’s a person more wonderful than God. It’s like talking about a place better than heaven! He said, “I am the bread of life. Whoever comes to me will never be hungry again.” To paraphrase, “If you really feed on me you won’t have any room left for meat or anything else.”

Lastly, I talked about when we revel in the life he lives in us and life we have in him we’ll be less apt to lust for material riches and to horde those riches for ourselves. When our soul is satiated and satisfied with Living Bread we find ourselves anxious to share our material and spiritual resources with those who lack them.

If we’re saturated and satisfied with Jesus our intuitive response is to want everyone he loves to be as full as we are – their stomachs and spirits both. Manna-full people are generous people.

This series has been a more severe approach than I usually take. I’m interested in your feedback, on the theme as a whole and/or any part of it.