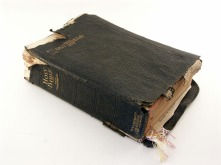 If I’ve heard it once I’ve heard it a thousand times that the Bible is outdated and therefore can’t be trusted to speak to our modern world. Our 21st century western culture has evolved past 1st century times, where it’s message and mores were more relevant. We’re better informed today about how the universe works and how society functions. We’ve advanced beyond the constricting limitations of a 2000 year-old book.

Which culture are we talking about?

My question is if culture is the plumb line for assessing the reliability and relevance of the Bible, which culture are we talking about – Western, Asian, Middle Eastern, African…?

Let’s just take two moral issues that are addressed in the Bible and see how they’re contradictingly interpreted in disparate cultures: Jesus’ command to turn the other cheek and the Bible’s censure of same sex relationships. [I’m partially indebted to a lecture by Timothy Keller on this topic called, “What is an Evangelical?”]

Contrast this with a culture very different from ours.

When we say that today’s culture has broken out of the outdated mores of the Bible, the question is, which culture are we talking about? There is more than one culture on the planet. And they differ drastically in their sensibilities.

Why should one set of cultural customs trump another? Is our culture the right one? Are we saying that our western culture is not only better than the Bible but also better than all the other cultures in the world? Are our cultural sensibilities to be preferred above all the others?

I’m not saying that culture has no part to play while we’re doing the sometimes difficult work of interpreting the Bible. We should always keep in mind the background of the culture in which it was written and our contemporary context in the foreground to do our best to apply God’s Book to our daily lives. But it’s inadvisable to let our own life context to become a pretext for interpreting each text in the Bible in any way we want. There’s something to be said for the so-called Golden Rule of Interpretation: “When the plain sense of Scripture makes common sense, seek no other sense.”

Which era in a particular culture are we talking about?

When we say that the Bible shouldn’t be taken as authoritative because it offends our cultural feelings we should specify which culture and which era we are talking about. God’s Book will inevitably offend every culture at many points. The choice we have to make is to change our lives to accommodate it or change it to accommodate our so-called evolved sensibilities.

What role does culture play in defining us?

Keller makes an important point that we are better off receiving our identity (from God and his Bible) than achieving it (through our efforts to make our own way in the culture we’re a part of).

In the West we’re advised to not let anyone else define us. We have to define ourselves based on our unique inner desires. The idea is that we need to be free to be who we are, do what we want to do, and that our true identity is rooted in what we desire most in our inmost being. We have to give expression to those desires, whatever they are, and only then can we know who we are. And we mustn’t let anyone else tell us those desires are bad*. They’re our desires and no one has the right to tell us any different.

The suggestion that our inmost desires define us is illogical because if we look inside ourselves we’ll see that even our deepest desires often contradict each other. For instance, on the one hand, you want to be a Space Station astronaut and live in space for the next 30 years. On the other hand, you want to be a wife and a mother. You really can’t have both. So which desire defines you – astronaut or mother?

Our wants don’t always harmonize with each other, let alone align with God’s wants, so sometimes (most times) we have to choose between them. We can’t base our identity on our inmost desires since they’re going to conflict with each other at some point.

Plus, we have to admit that our feelings and desires are always changing over time. What we want at 20, is not the same as at 30 or 40 years old. Does this mean that our essential identity changes every decade or so? It’s an unstable way to build a sense of personal identity on our desires, because they change. Our identity must be tied to something outside of us, something not so fleeting as what we want for ourselves at any given point in time.

This is why I like Keller’s dictum that our essential identity is to be received from the Designer rather than achieved.

*Clearly there are such a thing as desires that are evil.

“How can a young person stay on the path of purity? By living according to your word.” Psalm 119:9

Next time we’ll look at where the conscience fits in…