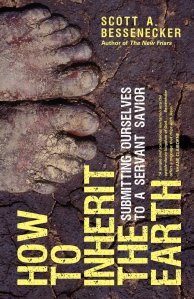 How To Inherit The Earth: Submitting Ourselves to a Servant Savior by Scott Bessenecker, the Associate Director for Missions for InterVarsity Christian Fellowship, is simply the best book I’ve read in years on spiritual influence. I wish I had understood and practiced the things that he unpacks in this small book about the ways of Jesus, in my early days of walking with the Lord and launching out into a life of service.

If you want to be a better, smarter, and more respected spiritual leader, may I recommend any number of books besides this one! The list of books whose quality is, in my opinion, disclosed by an excessive use of words like “strategic” and “successful,” is endless. You can search for them under keywords like “super-sizing” or “turbo charging” your ministry. Pastors and ministry leaders gobble up books like those hoping to learn the Six Secrets, the Seven Habits, or Twenty-one Laws of great leadership.

On the other hand, Bessenecker proposes that if Jesus had written books or launched out on the leadership seminar circuit they would have been called: Be Last!, Five Easy Steps to Becoming Everybody’s Slave, or 101 Ways to Welcome Children. He shows how the upside downness of Jesus’ teaching, though painstaking (sorta like a cross), is to be preferred over the entitled leadership-enamored model that dominates the atmosphere of the North America evangelical community.

Status, power and wealth are growth hormones for pride!

Notice that the beatitude from Matthew 5 does not say that the meek will conquer the earth or take over the earth. They will inherit it. It’s a trust given to them by their Father.

Accumulating stuff is carbon monoxide to the soul. It puts to sleep our spirit and then poisons it. The meek have learned to be satisfied with daily bread.

A life lived in simplicity, humility and obscurity will be a very handy asset at the end of the game when God is looking for meek people to put in charge. . . . The possessor of money, fame or power can easily slip into imagining himself or herself to be more important than those who do not possess such things, and try as they might to beat ego down, they find themselves tangled up in pride.

The man or woman who uses God-given power for personal gain—whether for positional power, financial power, relational power or religious power—will answer to the One who loaned them that power in the first place.

Up is down and down is up. Childlike meekness, invisible servanthood, seeking last place in a pecking order—these are the definitions of greatness in the coming kingdom. Such things spell death to pride.

He points out that the word “servanthood” gets flagged as a nonword in Microsoft Word and doesn’t appear in most dictionaries. They want to split it up into two words, “servant” and “hood.” What could that possibly mean anyway, a servant’s hood? Or a hood that’s a servant, or even a neighborhood made up of people who serve? . . . Motherhood, brotherhood, manhood, likelihood, knighthood, even babyhood don’t get flagged as misspelled. But servanthood has no place in the English language, nor does it have much of a place in American culture. And I fear that even within the church the idea of quiet, humble submission and service has been usurped by the value of exercising authority over others.

Having attended an inordinate number of leadership conferences myself over the years I concur with his assessment that, “The people paraded before us as leaders whom we’re to emulate are usually successful business or ministry professionals. Very few are invisible, obscure, simple followers.”

Books on submission simply don’t sell in America. In this leadership-besotted climate, can you imagine trying to market a book titled “Extraordinary Submission: Turning Your Company’s Strongest Leaders into Subservient Followers”? The only way you could hope to break even on such a title is for a few business moguls to claim that it was “a must-read for every leader.”

“Too often,” he says, “the leadership culture has suggested that Jesus was more interested in bigger-ness than he was in the transforming power of little things that die sacrificially.”

I think every pastor, elder, and sincere follower of Jesus should read this book. If you know anyone like that, please consider gifting this book to them! If that’s too scary for you, leave it on the front pew after service or merely share this blog with them and let me take the rap for being a know-it-all punk!

2 Replies to “How To Inherit The Earth”