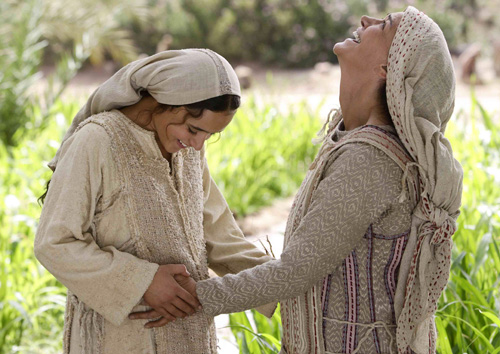 “The Bible,” claimed one little girl to her Sunday School class, “ends in Revolutions!” Her mispronunciation of the Bible’s last book notwithstanding, she got something right. The God of the Bible initiates and sustains REVOLUTIONS.

Another young girl got this in her famous song. Can you guess the song and its author?

From these clues did you guess it? Click here to see if you’re right.

“He hath scattered the proud in the imagination of their heart” (a personal revolution).

“He hath put down princes from their thrones” (a practical revolution)…

“and hath exalted them of low degree” (a social revolution)…

“The hungry he hath filled with good things and the rich he hath sent empty away” (an economic revolution)!

Collapsing thrones and humbled lords of this world, not to mention the rich being sent away empty while the poor are fed, not really your typical expecting mother/Christmas carol!

The “Magnificat” has been part of the church’s liturgy since the beginning and has been sung and recited for centuries. I wonder if we don’t hear it much during Christmas because we don’t sing many songs about the deceptive nature of power and wealth.  Songs of this nature don’t make the Top Ten Worship Song list.

Mary bursts out in a poetic prophecy about the baby in her womb. Evidently she expected Jesus to him to bring down rulers and thrones and lift up the humble. That’s revolutionary!

She had a faith-inspired imagination of what this child would do for her and people like her––poor, powerless, invisible. Could it be that this was God’s intention in inserting his Son into a womb in such bleak circumstances?

Jesus was coming through her birth canal and into the world to stir up trouble for the privileged and powerful. Jesus, Son of God, Savior, Prince of Peace––yes. But Troublemaker? Sounds about right.

Could this be the reason so many power mongers and oppressive governments have objected so vehemently to the song and banned its public recitation? Were they as afraid as was Herod of the message of this dangerously subversive Jesus?

People of power who have banned the song considered Mary’s words about God’s apparent preferential love for the poor to be too dangerous and revolutionary for public consumption. Guatemala’s impoverished masses, for instance, attached themselves to Mary’s message and her song inspired them to believe that social change was possible. Thus their government put the kibosh on it! Can you imagine? You can’t sing or recite that dangerous song anywhere at anytime in our country! That right there makes it a great song, don’t you think?

Similarly, after the Mothers of the Plaza de Mayo—whose children all disappeared during the Dirty War—placed the Magnificat’s words on posters throughout the capital plaza, the military junta of Argentina outlawed any public display of Mary’s song. Wow! They realized that if the poor started believing the song’s message their power over the powerless could be not long for this world.

So, back to Mary, what sorts of things did she anticipate her baby would accomplish on earth? She envisioned that he would topple rulers, scatter the proud, send the rich running, exalt and fill the humble. Her Son was destined to upset the status quo and turn everything upside down. What humans value most will implode and be replaced by the things God values.

It’s likely that Mary expected her Messiah Son would accomplish this revolution by forcefully removing rulers from their positions of power and put their wealth of the wicked in the hands of the righteous. Remember, she and her people suffered under the unkind domination of foreign occupiers. After all, not long after reciting her prophetic poem those occupiers required her to walk seventy miles while pregnant to the small rural town of Bethlehem. Don’t forget that nearly two years later she and Joseph were forced to flee with Jesus and become refugees in Egypt while Herod ordered half of Jesus’ playmates in Bethlehem to be killed! And we complain when we have to pay unjust taxes and work with a churlish employer.

If she did imagine a mighty Messiah who would overcome the Romans with force she would have been in good company with the prophet-to-be in the womb of her cousin Elizabeth to whom she sang her song. John himself eventually struggled with the method Jesus used to bring about the kingdom he had predicted. “Are you the one or are we to look for another?” By what means does he subvert the powers that be and fill the hungry stomachs of the poor (in this age, that is)?

Mary would likely have expect her Son to bring the revolution by demolishing Roman power with his superior power and immediately raise the downtrodden Jewish population from their plight.

For years she “pondered” everything she’d heard in her heart and wept as she saw him breathe his last. In time she and the eleven were able to piece together what he taught them about the nature of this stage of his revolutionary rule. Of course, his resurrection offered no small contribution to their understanding. It took them a while, but they eventually connected the dots about how he planned to subvert the powers and support the poor, i.e., through the work of his Church in the power of the Spirit!

How Jesus goes about subverting the present order of things is the theme of the series of posts.

In the meantime, let’s hope this the song of the subversive will make a comeback. And let the revolution begin!

2 Replies to “Have A Revolutionary Christmas!”