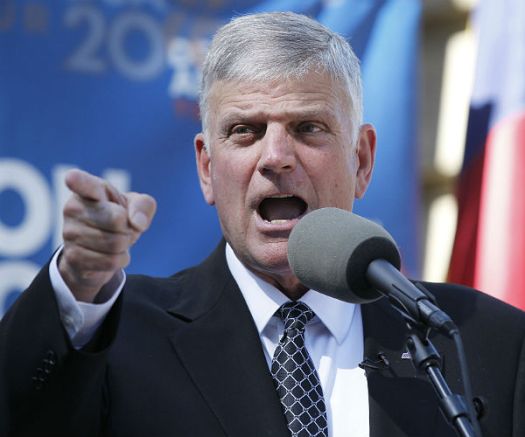 Franklin Graham, president and CEO of the Billy Graham Evangelistic Association and of Samaritan’s Purse, an international Christian relief organization said, if a president “will lie to, or mislead, his wife … what will prevent him from doing the same to the American public?”

Gary Bauer, former president of the Family Research Council, Republican presidential candidate in 2000, now president of American Values, a non-profit organization committed to defending life, traditional marriage, and equipping our children with conservative values reported his distress about the scandal dominating the headlines: “I walk around my home with the TV remote in my hand for fear that [my children] will come in the room when a story about the president comes on. [Thanks to the president] our kids have been taught that fidelity is old-fashioned, that adultery is the norm.”
Focus on the Family founder Jim Dobson lamented, “As it turns out, character DOES matter. You can’t run a family, let alone a country, without it. How foolish to believe that a person who lacks honesty and moral integrity is qualified to lead a nation and the world! Nevertheless, our people continue to say that the President is doing a good job even if they don’t respect him personally. Those two positions are fundamentally incompatible. In the Book of James, the question is posed, ‘Can both fresh water and salt water flow from the same spring” (James 3:11 NIV). The answer is no.”

It’s about time these great spiritual leaders came to their senses and communicated their moral outrage against the president for his philandering and lying ways!

Oh wait. These men made these comments twenty years ago about then Democratic President Clinton and his philandering and lying ways! Oops!

FYI, all three of them are avid supporters of our present president in spite of his unbridled libido and shameless and unrepentant trash mouth. Double oops!

I guess party politics does play a teensy role in what some people choose to be outraged about. It begs the question:

How much do some so-called Christians actually care about biblical morals when they can so easily dismiss them when it’s their guy in the office philandering and lying?

As much as it pains me to out fellow believers, “Judgment begins in the house of God.” (1 Peter 4:17)

Once again embarrassed by association.

6 Replies to “Finally, evangelical leaders speak out on the president’s sexual mores and lies!”