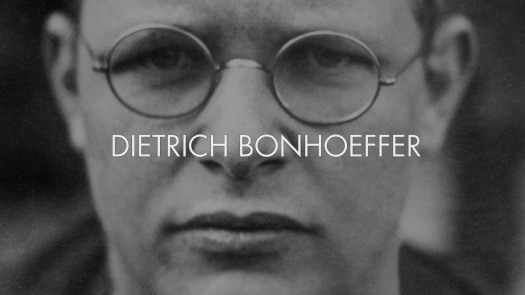 Barney: Dietrich Bonhoeffer*, it is a distinct pleasure to have you in the studio with us today. You are a hero of mine and of many around the world for your seminal theological work and sacrifice for your generation and for humanity.

Barney: We’ve asked you here today to seek your advice on how we might think and act during our plight in the Trump presidency. I realize that there is no precisely straight line to be drawn from the Führer of Germany in your time to our contemporary POTUS, yet, many of us believe there are enough similarities to warrant concern.

A lot of folks have invoked your name and legacy in support of one or another socio-political viewpoint, leveraging your reputation to propagandize. It’s an effective method of garnering support and motivating devotees, but my motive is to pick your brain about how the Christian community in America should proceed in these politically perilous times.

You invested your brief life on earth warning the German Church about Adolf Hitler, and though I don’t think the stakes are as high for us as it was in your context, I wonder if we might be able to get ahead of this trend toward totalitarianism by heeding advice from a martyr such as yourself. Many of us love our country and are profoundly disturbed by Mr. Trump’s administration and his unflagging and fawning fan base, many of which claim allegiance to Jesus. What would you say to them?

Bonhoeffer: I’d begin by saying that, for the believer, allegiance belongs only to Jesus Christ. The sort of sycophantic praise of your president that I’ve been watching is, at best, misplaced and uninformed, and at worst, idolatrous. I don’t believe Donald Trump is worthy of even the slightest of accolades for which he trolls incessantly, let alone of the worship-like devotion that those who profess faith in Jesus Christ give to him.

Barney: So, how did your countrymen, as well as many of your fellow Christians relate to Adolf Hitler? What was the German Church’s response to the Führer, especially in the early days of Nazism?

Bonhoeffer: In that time you were a perpetrator, a collaborator, a bystander, or a resister.

Barney: Could you break that down a little for us?

Bonhoeffer: Hitler and his Nazi Party members were perpetrators of the atrocities against the Jews and other “undesirables.” And believe it or not, much of what they did, they perpetrated under a “Christian” banner. They twisted Scripture in such a way as to justify a biblical basis for eliminating anyone that impeded the ascendance of the master race.

Barney: Mr. B, many who occupy offices in this administration identify as “Christian.” I personally believe that many of them also perpetrate a very dangerous trajectory for our country. They may have Bible studies in the White House but in my opinion their policies and personas are antithetical to the way of Jesus and are socially, politically, and spiritually toxic. And while the assault on our democracy is not as severe as Hitler’s Germany, many of us think Mr. Trump and his cabinet do damage to the American psyche, to its moral conscience, and to the democratic process in general, to say nothing of our relationship with other countries.

Bonhoeffer: I saw the footage and heard the chants of supposed “Christian” neo-Nazis at your Charlottesville tragedy–– “Jews will not replace us!” they shouted. I couldn’t help but harken back to how demonstrations such as that in the 1930s were a precursor to the concentration camps and the murder of millions of innocent people. When I saw American marchers displaying swastikas and crying, “Blood and soil!” it turned my stomach.

Barney: Yeah, that was definitely one of our own darkest days.

Bonhoeffer: And when your president implied a moral equivalence between the opposing sides I couldn’t believe what I was hearing. It was surreal.

Barney: Do you think our president and his loyalists are “perpetrators” of a vision for America that leans more toward fascism than a democratic republic?

Bonhoeffer: Yes I do.

Barney: With that, we’ll conclude our conversation for now. Next week we’ll take it up where we left off and talk about what you are calling “collaborators” of Nazism. Thank you so much, Mr. Bonhoeffer, for talking with us.

Bonhoeffer: Thank you for having me.

*OK, since Mr. B has been dead for over 70 years these conversations would be logistically impossible, yet in my opinion, ideologically plausible.

One Reply to “Bonhoeffer on Trump: A Postmortem Interview (Part 1 of 4)”