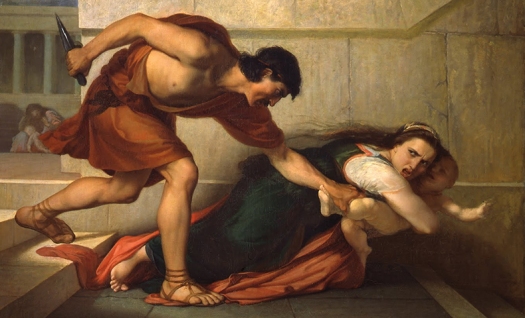 Have you ever given any thought to the parents of the babies that Herod murdered in order to do away with Jesus? How would they ever be able to deal with their loss?

The Catholic Church calls the children “Holy Innocents.” If you’re Catholic you’ll know that the Church even has a special day, usually December 28th, to commemorate the death of the boys, all 2 years and under. Herod murdered them in his quest to keep the Jewish Messiah from growing up and taking his throne.

How those parents must have had their hearts torn out when the soldiers stormed into their houses, pulled their babies out into the street and murdered them! How they must have wept and grieved, and their grief turned to anger. Who would they blame? Where would they aim their anger?

First in line would be the soldiers, of course! Then again, they were under orders. They had no excuse, but there was someone up the chain of command to blame––all the way up to Herod himself. He was ultimately to blame. This is a guy who killed his wife, his brother, and his sister’s two husbands, to name only a few.

But there was someone further up the chain––God himself. If he hadn’t sent Jesus then Herod wouldn’t have given the order to his soldiers and their child wouldn’t have been targeted for assassination. It was ultimately God’s fault.

Their boy was, as the Church later called him, a “Holy Innocent.” He certainly couldn’t be blamed for his own death. He was too young to merit a premature slaying. Maybe it was the sin of the parents that got their kids killed. That must’ve gone through their minds. [Jesus addressed this later. (John 9:3)]

I can imagine these parents commiserating with each other. Bethlehem was a small town. It’s almost certain that everyone would know who had had their babies ripped from their arms and slain. How would their conversations have gone over the days, the weeks, and the years about that terrible night? They say that time heals all wounds but I’m not so sure about that, especially a wound like this.

How would they have processed their loss knowing that somewhere in their town was another Baby. He was the original target? Was he dead too? Did they murder him as they had their son? If not, how do his parents feel about causing the deaths of their children?

The whole thing just doesn’t seem fair to me. From our nice comfy homes twenty centuries later we Christians might be tempted to theologize the story and think they must have received comfort from the fact that God had a greater plan and that the Messiah needed to be protected at all costs, even at the cost of their child. But I doubt that, at least in the short run, this would assuage their sadness and anger over losing their boy.

Let’s switch over to another parent who lost a child, actually ten children, all in one day––a man named Job. When his “friends” showed up with their condolences all they gave him were fortune cookie platitudes, tidy prefab answers for every occasion. Unfortunately, this is a common practice among many Christians. But Job he wasn’t buying it. He screamed back at them: “How long will you torment me and crush me with words?” (Job 19:1)

To them, everything was cause and effect. Live this way and everything works out. Pray this way and you always get what you want. Don’t, and you’ll always be disappointed with the result. It’s classic, “God In A Box” theology.

It’s hard for us to live with mystery, enigma, paradox, and wonder. We like it better when everything is nailed down and has a clear explanation, when it fits a pattern.

Oswald Chambers says, “From cowardice that shrinks from undiscovered truth, from laziness that is content with half truth, from arrogance that thinks it knows all truth, O God of truth, deliver us!”

So many Christians are spiritual experts with pat answers to un-pat questions. Pascal said, “I don’t trust Christians. They know too much about God.”

One of Job’s counselors even said that his ten children probably died because they were sinful (Job 8:4)! Great counsel! If God killed everyone sinful person he’d have to do away with the entire planet! A lot of people don’t so much believe in God, they only believe what they believe about God. Their faith fits a tidy formula. But faith has no formulas. God is not karma or a pawn of formulas. He’s a Person, someone you can talk to and sometimes he will even talk back.

Don Miller says, “Formulas seem much better than God because formulas offer control; and God, well, He is like a person, and people, as we all know, are complicated… Why are we cloaking this relational dynamic in formulas? Are we jealous of the Mormons? Much as we want to believe we can fix our lives in about as many steps as it takes to make a peanut-butter sandwich, I don’t believe we can.”

“Give God ‘elbow room’;” says Chambers again, “let Him come into His universe as He pleases. If we confine God in His working to certain ways, we place ourselves on an equality with Him.”

So at the end of both of these stories, God shows up. To Job he speaks from a whirlwind and does something much better than that in Jesus. In neither case does he come with tidy answers to their questions. He just shows up.

He points out Job’s failure to acknowledge his ignorance about the complexity of the world he has created. Interestingly enough he doesn’t explain anything to Job or defend himself. He doesn’t reveal any secret plan. He just reveals himself.

On my part, I’ll take one encounter with God over a thousand explanations! In that case, I might not end up with tidy answers to all my problems, but I’ll have God. Faith doesn’t mean we have God all figured out, it means we can live with him without having him figured out.

It’s legit to desire answers and even ask him for them, but it’s not that we deserve them, or have the right to demand them. Faith can rightly hope for the best and yet be prepared for the best to be other than what we’d hoped!

In the case of the massacre of the “Holy Innocents” God didn’t speak in words, instead he sent The Word to make his dwelling among us. I don’t think he gave them an explanation, but he did provide a revelation of his Son. God didn’t send His Son into the world to explain stuff to us, but to save us.

“Jesus is called the Word because a word is the expression of a hidden thought,” says E. Stanley Jones. “Unless I put my thought into words you cannot understand it … So the Hidden Thought––God––becomes the Revealed Word––Christ.”

Would knowing this have relieved all their grief and pain? I doubt it. Yet, one would hope that someday those parents would have a personal encounter with the One whom their child died to save. If so, while it wouldn’t have made everything okay, it would invite them into a kingdom wherein they would someday be with their child again (2 Samuel 12:23).

Knowing him is the only way I know how to live with loss without losing hope. I’ll take whatever explanations he chooses to provide, but in the meantime, I’m content with encounters with him.

2 Replies to “Dealing with the Slaughter of the “Holy Innocents””