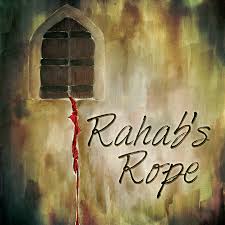 “Sharing faith is not like teaching a class on the fundamentals. It’s more like riding on a train with our hand out to give people running alongside a chance to come aboard.”

It would be a stretch to claim that the scouts fully understood that the red rope signified Rahab’s salvation from judgment. But being immersed in the Passover story and the miles of scarlet thread woven into the tabernacle and priests’ vestments, it’s conceivable that they inadvertently chose the red rope to make a creative––if not oblique––reference to her deliverance by sacrifice.

Jesus frequently illuminated his message by referring to farmers’ seeds, shepherds’ sheep, and vinedressers’ vines. You might say that the scouts subconsciously used the red rope to “preach the gospel” to Rahab. In like fashion, we should be keen to read the clues that the Spirit places in front of us and creatively employ them in sharing the salvation story.

The scouts didn’t have time to tell the whole story about sacrificing lambs and painting doorposts. Opportunities for unpacking the redemption story would come later. For the moment, a red rope would have to do. Similarly, many of our gospel-telling opportunities are time-sensitive and require a resourceful use of whatever object or metaphor that presents itself.