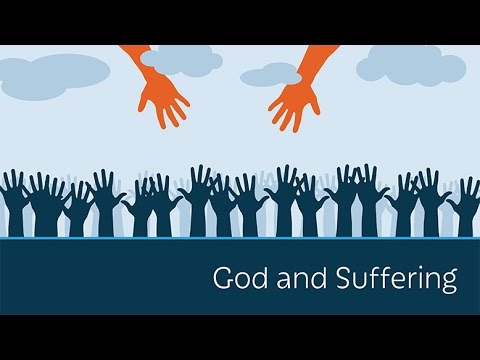 He was despised and rejected by mankind, a man of suffering, and familiar with pain. Like one from whom people hide their faces he was despised, and we held him in low esteem. Surely he took up our pain and bore our suffering, yet we considered him punished by God, stricken by him, and afflicted. Isaiah 53:3-4

Throughout this series we’ve talked about evil and suffering finding its way into our world and how, though God isn’t directly to blame for it, he did exercise his sovereign prerogative to create a risky system wherein we have free choice whether or not to receive and reciprocate his love. Since there is so much evil and suffering in God’s world, it begs our final question, “What does God even know about suffering?”

This wise and perfect God chose to suffer. It could be said he is unique in that he lost on purpose! He has suffered ever since his first two image bearers traded the warning of a good God for the word of a liar. He suffered when he removed them from his Paradise, again when one son of theirs murdered the other, again when their progeny became so crooked that starting over trumped straightening them out as his only choice. He’s been suffering all along with the evil and suffering of his sons and daughters.

You hear it in his voice as he pleads with us to leave our own ill-advised path and return to the one he laid out for us. He suffers with the stillborn child’s mother, with the victim of sexual abuse, and those subject to gang-related violence. His compassionate heart aches for tsunami and earthquake victims, with each starving African, with his persecuted saints, and with refugees and asylum seekers displaced by war and famine.

But most shocking of all, he chose to be the greatest victim of evil and suffering at a brutal crucifixion. This God and no other entered our corruption, became evil, and punished himself (2 Corinthians 5:19-21)! In his wisdom and love he chose to suffer the sentence our sin deserves. The omnipotent God created a world in which he ends up suffering a dreadful death at the hands of his creation!

As “the radiance of God’s glory and the exact representation of his being” (Hebrews 1:3), Jesus gives us a peek at the Father’s propensity to suffer. Like Son like Father. The Son suffered sin’s sentence and the Father suffered the suffering of a father viewing the torment of his son.

Michael Green posits that the best answer to the problem of undeserved human suffering is found in the sacrifice of Jesus: “In Jesus, God has come to share our pain. God is no absent academic who writes a book on the problem of pain. He got involved. He has allowed pain at its most severe to strike him. We worship a suffering God.”

“The cross reveals that God’s omnipotence is displayed in self-sacrificial love, not sheer might. God conquers sin and the devil not by a sovereign decree but by a wise and humble submission to crucifixion. In doing this, the cross reveals that God’s omnipotence is not primarily about control but about his compelling love. God conquers evil and wins the heart of people by self-sacrificial love, not by coercive force.”

He can and often does intervene in our suffering, but when he doesn’t, I’m convinced he weeps with us I such a way that we can almost feel his tears dropping on us from above. He’s never aloof from the sufferer. Before he breathed into our lungs he determined to experience everything that his beloveds experience. When we suffer he can truthfully say, “I know, I’ve been there––and worse.”

A reporter asked Mother Teresa, “When a baby dies alone in a dark alley in Calcutta, where was God?” She said, “God was there suffering with that baby. The question really is, where were you?”

Let’s conclude at the point we began, in that opening scene where God planted, not one, but two trees in center of his the original garden paradise. After eating from the illicit one they were barred by a big scary angel from eating from the other (the tree of life). We who follow Jesus and live as overcomers in this world, will eat our fill of this tree forever in the ultimate paradise of God (Revelation 2:2,7; 22:14). This privilege is entirely due to another tree, one that was planned before creation but not planted till millennia later, the one on which Jesus suffered the curse in our place (Galatians 3:13). On that tree he agonized under the weight of our evil and provided a way back into God’s lush garden to eat the fruit that is Life.

Here are the links to each of the posts in this series:

5 Replies to “WHAT DOES GOD EVEN KNOW ABOUT SUFFERING?”