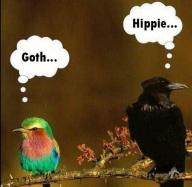 In Part 1 I talked about the bad habit even followers of Jesus get into, the hell-inspired practice of name calling. I offer here a further list of the harmful effects of labeling one another.

It’s particularly libelous when we mislabel someone, intentionally or not.

Those who were afraid of the work of MLK or Dorothy Day labeled them “Communists.” They weren’t. They just cared about the poor and marginalized in ways that threatened those who obviously cared less. There are a number of people who, in order to discredit President Obama, call him a Muslim. He isn’t. Someone cares about the environment and they’re derogatorily labeled a “tree hugger.” Anyone who believes that marriage should only be between a man and woman is automatically “homophobic.” A person against abortion is anti-feminist and chauvinistic. These assumptions may or may not be true, but must be judged on an individual basis rather than painted with the broad brush of prejudice.

As a teenager my son was the sloppiest human being I had ever met. (He’s not anymore. His wife talked some sense into him.) Entering his room in those days required HASMAT gear. On the floor were items piled atop other items that hadn’t seen the light of day for months. Under their respective mounds the bed, closet, and dresser were all indecipherable as distinct entities. But the worst of it was when the organic and inorganic heaps poured out into, and gradually down, the hallway outside his room! It was like an alien invasion was propagating throughout our house. That’s when I would step in (literally) and at least shovel the debris out of my sight and back into the landfill loosely called his bedroom.

One particular day in a temper tantrum I shouted, “You are the sloppiest person I’ve ever met! You are a total slob!” I admit that it felt good for about two seconds, but once the steam I had blown off dissipated I realized that I had just defined him. I had given my son a definition, a label to live down to. Though I wasn’t entirely over my fury, before the label sunk in to his vulnerable psyche I realized I had to backpedal. “OK, I’m sorry for calling you a name. That’s not your identity, it’s not who you are. The way you keep your room is outrageous and it has to stop. You keep this room like a pigpen, but you’re not a ‘slob’! You’re bigger than that. So get it together!” I’m sure I said some other choice words that I’d rather not cop to or remember at this time. But the point is, labels limit people.

Labels aren’t large enough to explain a person. Each divine image bearing human is bigger than any one label can contain. It makes me feel big to keep someone else small – at least bigger than they are! It’s belittling when we put someone in a small file folder where we can keep them from breaking out of our definitions – literally belittling.

The most common manufacturers of labels are the twins, fear and anger.

When we’re afraid of or angry at someone or some group of someones the easiest thing to do is to put a label on them. Conspiracy theorists are quite adept at this tactic. (If I weren’t in the middle of letting all labelers have it I would’ve called them “Conspiracy Kooks,” but that would be using the tactic I’m critiquing. So I won’t.) Anyway, people obsessed with conspiracies under every rock, people are everywhere out to get them, are expert at labeling their conspirators (real or imagined). So if you’re in the hunt for name to call a group about which you’re suspicious, I’m sure there’s a “Conspiracy.com” that will give you some good ideas.

It seems to me that particularly since 9/11 Americans in general are more satiated by fear and anger than ever before (at least in my lifetime). Maybe it was as bad or worse after Pearl Harbor, but I wasn’t there to observe the shift. I get it. It’s a dangerous world out there. Terrorists terrorize. That’s what they do. And since we’ve been attacked, our country has been more cynical, terrified, and pissed off about a lot more than terrorism. Fear and anger seem to have leached into our psychic aquifer. We’re more apprehensive and suspicious than we ever used to be. One way you can gauge this is by the skill we’ve developed to insultingly classify people with labels.

You might’ve noticed that instead of two parts, this has now morphed into three. Next time I’ll talk about how Labels make it easier to abuse people and how Labels are incendiary.

Until then, I challenge us all to go on a name-calling fast.