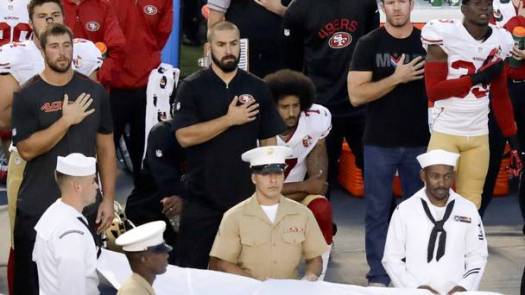 Some people applaud Colin Kaepernick’s method of protest, while others load up for bear. Because I’m aware of the demographic of the bulk of my “readers” I feel the greater need to speak initially to the latter, to appeal to you to put lower your weapon and put it on safety.

You may not appreciate the means Kaepernick chose or care much for the messenger himself for using those means, but I’d like to propose that rather than degenerate to rhetoric-laden rancor, let’s see if we can’t turn this into an opportunity for dialog and even open-minded debate. I trust that you’re discontent with an immature knee-jerk reaction of self-righteous one-liners. Don’t make this into a Left versus Right, Us versus Them, Black versus Blue. Let’s do our best to focus on right versus wrong. I’m not talking about “I’m all right and you’re all wrong!

Instead, let’s try to get into the Maker’s head for a moment and imagine what he might be thinking about all this. After all, it is him to whom we have to give an account. It’s not our party, our people, or our personal preferences that matter as much as what the Creator wants––the One Who requires that we love our neighbor as much as we love ourselves.

I love our country as much as most. And when I see her citizens (especially those who are in the Church) acting badly I pray and then sometimes, if I have the leading of the Spirit and a platform for it, I say something. I’m sure you do the same. I also love our nation’s anthem. I always stand when it’s sung at baseball games and often have a tear in my eyes for the privilege I feel about being an American.

I have to admit that irritation was my first reaction to the news of the Kaepernick protest. Off the top of my head, which is not usually the best part of my head, it was the wrong thing at the wrong place at the wrong time to make a statement about police brutality. After further review, all I can say is maybe it was and maybe it wasn’t. Only God knows for sure.

I don’t know if Kaepernick loves this country or not, but he did observe some of her citizens acting badly, some law enforcement officers in particular. He saw what we all should see and care about, that in a number of cases, police have treated their own fellow citizens with brutality, and evidently he felt he had to do something, to make a statement.

I said that I speak up “when I have a platform” to do so. Being a flawed spokesman, sometimes I say or do the wrong thing in the wrong spirit. When I become aware of it I regret it. Sometimes the truth I speak is not in love and sometimes I wimp out and err on the side of what I think is “love” and fail to speak at all. Is it possible that Kaepernick’s method was misplaced and he used his “platform” unwisely? Sure. But I don’t know for sure.

What I do know is that his cause is just and whatever you think of the messenger, his message should be heard. In many many ways we’re obviously not as great a nation as we should be by now. Systemic racism and our gratuitous use of violence both in the hood (black on black) and in law enforcement (blue on black) is clear evidence of that.

Billy Graham has said many times that racism is the world’s biggest social ill. If we want to “make America great again”––to coin a phrase––I suggest that these are some of the major sins we should be looking at and repenting of.

Have you noticed that it’s the ones for whom the status quo is working just fine, those who are most benefitted by the present state of things, are the ones who fight the most vehemently to retain it? Some people are simply ignorant that there are those in the world for whom the status quo isn’t working. They don’t see, and often don’t want to see, the inherent privilege that belongs to them as members of the majority culture. Others, with a clear vested interest in the status quo, see the obvious disparity between them and those who possess no such privilege and they posture themselves to protect their position with whatever means necessary. In their own minds their might makes them right.

The status quo doesn’t work for those with fewer rights or the might to protect them. The prophet said, “But let justice roll on like a river, righteousness like a never-failing stream!” (Amos 5:24) But unchecked, injustice will also roll on like a river, a stream of social inequities. If no one stands when everyone else sits or kneels when the rest stand that current will continue.

I don’t know what’s it’s like to be black in America or to be a cop in Chicago or Oakland, but I agree with John Perkins who said, “There is no reconciliation until you recognize the dignity of the other, until you see their view- you have to enter into the pain of the people. You’ve got to feel their need.”

Did Colin Kaepernick do it right? I’m not sure. But I am sure that if we want to get it right, the last thing we need is a bunch of rankled, self-righteous rhetoric from Christians. Instead, let’s look at this as an opportunity for some humble dialog with grace-seasoned speech. Let’s talk TO each other and not ABOUT or OVER one another. Of all people, it’s the lovers of Jesus who should declare a ceasefire long enough to let his kingdom come and his will be done in America as it is in heaven.

Next time I’ll talk about the anthem as a symbol of patriotism, not necessarily as a sign that one is truly patriotic…

If you want to, let’s have some grace-imbued conversation about this. And even if we disagree, let’s disagree agreeably in a God pleasing way.

Everyone should be quick to listen, slow to speak and slow to become angry, because human anger does not produce the righteousness that God desires. James 1