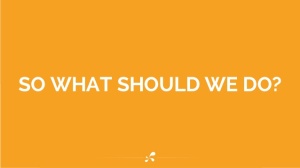 John was at the river preaching hard and heavy as always. He called his audience (the religious ones in particular) a bunch of snakes and threatened them with the image of God’s ax leaning up against the tree ready for chopping! Not really your run of the mill prosperity gospel preacher was John! Most of all he commanded them to “bear fruit that shows your repentance is the real deal!”

Three different groups of people who insisted on escaping the ax wanted to know what that “fruit” would look like. One after the other asked him the same question: “What should we do?”

Each group had something that John told them to surrender in. One group had stuff (more food and clothes than they needed), another had leverage (the IRS of the day), and the last group had power (sword-wielding soldiers). What would repentance look like for each?

To those who had enough to eat and to wear he commanded to share what they had with the poor. He ordered the tax collectors to collect no more than what was required. And he forbade the soldiers to intimidate people out of their money.

How can we extrapolate from each of these what the “fruit of repentance” might look like for each of us? What must we surrender in order to live repentantly? I propose these for your consideration:

These are not optional activities, but standard equipment for the truly repentant. On our list of evidences of the genuinely converted we Evangelicals tend to include only private morality issues (i.e. be sexually pure, law abiding, moderate drinking, Republicans). I made up the Republicans part, but I know for sure that some people have that on their lists for the truly Christian.

What’s interesting to me is that we typically don’t include the things that John demanded to demonstrate that we’re genuinely converted. Look at it again and you’ll see that he proposed social morality (i.e. social justice issues) as essential to authentic spirituality. Caring for the poor (not just caring about them), using our leverage for the betterment of those without and our power for the protection of the powerless. Let’s unpack these and see how we stack up as truly repentant, fruit-bearing Christians.

If we have food and clothes we have to share some of it with those who don’t have enough.

“When human systems distribute God-given resources in a way that places a small fraction of humanity in luxury while a billion people live – or die – on less than a dollar a day, can that be anything other than sin?” Howard Zehr

Two shirts––that’s not very many by developed country standards! I mean, how many shirts hang in your closet or lay folded in your dresser drawers? I don’t know about you, but I have way more than I need. It’s not like it’s sin to have a bunch of shirts. The number isn’t as important as our willingness to give them away when someone needs them more than we do.

John said if they had two shirts they should give one of them away. The math is pretty simple. The givers and the receivers would end up with one shirt apiece. He was telling them to part with half of their wardrobe! The Bible doesn’t teach a socialistic total equality of stuff, I’m just saying that it’s interesting that in this equation, everyone ends up with the same number of shirts.

I’d also like to point out that he’s talking about giving a shirt to people who literally have nothing to cover themselves, at least the upper half. They have “no shirt.” It’s not that they don’t have the latest brand of shirt. They don’t have a shirt! The maxim about the person who would “give you the shirt off his back” comes to mind.

I have a friend from El Salvador who, when he came to America as an adult decades ago, had on his wish list to own two pairs of pants. Up until then he’d only ever had one pair of pants at a time. Two, he thought, would constitute a boon! So, yes, a lot of people in our world would give just about anything to have a tiny fraction of what we have.

John’s shirt-sharing mandate wasn’t the end of it. “Anyone who has food should do the same,” that is share your food with those who won’t eat today unless you do. “Anyone who has food…” That’s most of you reading this. Most of us probably even have way more food than we need. We have more than the “daily bread” Jesus told us to pray for. We have enough bread to last us to the next blue moon––and beyond.

Millions of people in our world today are running around without adequate clothing or the guarantee of their next meal. And we can rationalize our non-involvement till the cows come home, but this isn’t right.

Pope Francis said, “How can it be that it is not a news item when an elderly homeless person dies of exposure, but it is news when the stock market loses two points?” Two of the main crises in the world are dehumanizing poverty and dehumanizing consumerism. The Church should be modeling the opposite spirit of both!

Next, we’ll look at those with leverage and how we might use if for the advantage of those who lack it…

In the meantime, my book is coming to Amazon near you! Stay posted.