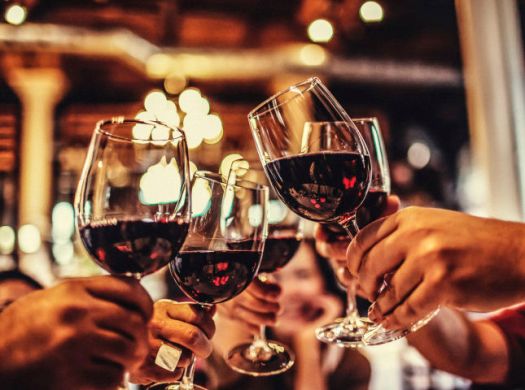 Besides the cheap wine I guzzled as a teenager, I know next to nothing about wine. Though an oenophile I’m not, there is something called the Internet from which one might become moderately conversant on nearly any topic of choice. I learned that while most wines are meant to be consumed, within the year they were made. (Consuming sounds different than the guzzling I did in my youth.) They say that only about one percent of the world’s wines are best when aged for five years or more. But there is a definite merit to a certain amount of aging of the wines most revered.

Jesus drank wine, used it as a backdrop for spiritual lessons, and even made a bunch of it out of water at a wedding (to the tune of 180 gallons worth!).

I’ve found that the older I get the more I refer to “the good old days.” That’s exactly what they are––good OLD days! Someone defined a conservative as a person that says nothing should ever be done the first time!

The Christ-led journey, however, is one new thing after another. My advice is if you don’t like new stuff, you might want off this bus and give your seat to someone who’s actually going somewhere.

It seems as oxymoronic as the sign on store that read: Antiques Made While You Wait!

Jesus wine is “new aged wine,” not to be confused with New Age Wine! It’s new but it’s aged. It’s even better than old aged wine. It’s better because it’s new and it’s aged at the same time.

Jesus wine is not really new, it’s just new to us. His wine has been aging since the beginning of time. Like the wine Jesus made from water at the wedding, it’s new in the sense that it’s newly introduced. They called it the “best wine.” Aged wine made on the spot!

Jesus gave this whole wine and wineskin metaphor when some people asked him why his disciples didn’t practice their faith in the same way as the Pharisees and John the Baptist’s disciples.

Jesus’ disciples didn’t do things the way the other religious folk of the day and people wanted to know why. Their question was about faith’s practice (fasting, hand washing, and the like) and his response was about paradigm. The what of his faith wasn’t as important to him as the why of it.

Like them, we tend to get hung up on the container more than the contents of our faith. A lot of people faithfully “do devotions” or “pay tithes” or “say prayers,” and when other people don’t do the same things or do those things differently than them, they object. They don’t go to the wrong church or believe in the wrong things or belong to the wrong political party.

Jesus said that new wine needs a new wineskin because it’s flexible enough to accommodate the swelling new wine inside it. An old skin is too stubborn to accommodate wine so expansionist. It’s an issue of both contents and its container. We need to be containers compatible with new wine that he pours in.

But first things first… There’s no point in getting the newest and coolest container in the world if we’re not going to drink new wine! We Christians are most apt to upgrade containers assuming that new wine will automatically fill it. A new church, a new pastor, new worship songs, new programs, a new devotional plan, a new Bible app––and all will be well. We spend too much energy on “doing church better” and not enough on “being a better church.” At the end of the day we’re left with a brand new container for a lot of old wine!

To coin a phrase, it’s the cart before the horse. The way it works is wine first and then flexible wineskins to contain it. Otherwise our lives and churches are cool containers filled with rancid wine. We spend millions on buildings and create bureaucracies and budgets on our contemporary yet hidebound containers while God waits to pour the wine.

“Everyone brings out the choice wine first and the cheaper wine after the guests have had too much to drink; but you have saved the best till now.” John 2:10

Jesus wine is not the “cheap” stuff that they break out when people are too numb to notice. His is the “choice” wine of the ages. For centuries they had been sipping on his wine until he showed up with a lifetime supply of aged new wine!

But the conservatives of his day were disinterested in anything with which they were unfamiliar. The wine they had been drinking was not the true wine of God but the rancid wine of religion. When Jesus came a-pouring they turned him down flat. “The old is better!” they cried. Their wine had long before turned to vinegar and they didn’t even notice it. Oddly, their palate had become accustomed to it that way and they lost their taste for the wine of God.

The Pharisees are “the same yesterday, today and forever!” We all have a little (if not a lot) of the spirit of the Pharisee in us. The litmus test for the degree to which this spirit dominates is our reticence to try new wine. The more we hear ourselves saying, “The old is better!” the more obvious it is that we’re losing our taste for God’s new adventures. Yesterday’s mercies give way to those that are new every morning! But how would we know if we sleep through every sunrise?

Years ago I heard someone say, “It’s not good to be where God was!” Our Jewish family members learned this lesson while following the pillar of fire and cloud around the wilderness. They moved when it moved, whenever it moved and however far it moved. Always a good idea–– even if it scares you, go with God! There’s something good ahead.

“New wine” is not a new Jesus. It’s letting him be the Jesus he actually is. We don’t need different Jesus or someone other than Jesus. We need the wild and unfettered Jesus, the One who brings the wine to every gathering, the best wine, and lots of it!

Assuming that they were following the customary order of things, the wine the guests had been drinking till it ran out was the “choice wine.” They would have started out with the best stuff––or so they thought. But when they tasted the Jesus wine it was actually better than what had formerly been deemed the best! See, there’s good wine, the best people have to offer, and then there’s the best of the best. That’s the wine Jesus brings to the table! His is better than the best that humans can bring.

Be brave, take a sip, and see if his choice wine isn’t the best wine you’ve ever tasted. And then drink deeply!

PS, my book, The Other End of the Dark, will be available in both eBook and print formats in the next few days. Check it out!