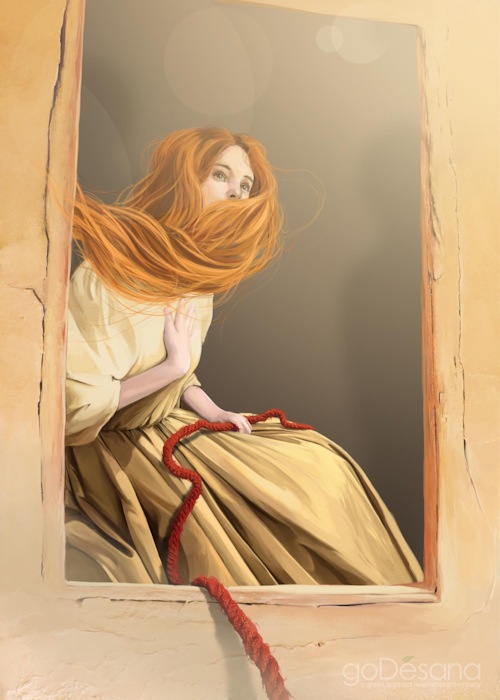 There’s a ministry in India that rescues and re-trains sex slaves, called “Rahab’s Rope.” Its founder says: “The rope in the story represents Rahab’s rescue both physically and spiritually, and there is a high probability that Rahab made the rope herself. Our hope is that, just as the rope that Rahab made represents her rescue, the skills taught to the women at our women’s centers will represent their physical and spiritual rescue as well.”

The British Royal Navy used to weave a scarlet thread throughout all their rope. No matter where you cut it, this red thread could be seen. Figuratively, you might say that God wove a scarlet thread––the story of sacrifice––to run throughout the entire Bible and that wherever you open it you’ll find the sacrificial blood of Jesus represented. It appears in the sacrificial system, in prophecies, in the narrative of the cross itself, and in the teaching of the Apostles. If there’s a prominent theme in both testaments, it’s Jesus’ bloody sacrifice.

Most Bible teachers affirm that the “scarlet cord” that Rahab tied in her window calls to mind the crimson blood of Jesus. The redemptive red rope is the Jericho version of the Jewish Passover. In order to escape judgment, they painted the blood of the sacrificial lamb on their doorposts. Like the Jews in Egypt, Rahab and her family were exempt from the coming judgment by displaying the crimson emblem that pointed to the blood that Jesus would someday discharge beneath his cross.

It would be a stretch to say that the scouts knew exactly what they were doing by using the red rope as an insignia of safety from judgment. But being immersed in the Passover story and the profuse amount of scarlet thread woven into the tabernacle and priests’ vestments, it’s conceivable that they inadvertently chose the red rope to make a creative––if not oblique––reference to deliverance by sacrifice.

You might say that, using her red rope, they “preached the gospel” to Rahab. They used her rope in the same way that Jesus, in order to illuminate his message, used the farmer’s seeds, the shepherd’s sheep, and the vinedresser’s vine. In like fashion we should be keen to read the clues that the Spirit places in front of us and creatively employ them in sharing the salvation story.

As with many of our friendship quest encounters, for the scouts, time was of the essence. They didn’t have time to tell the whole story about sacrificing lambs and painting doorposts. Opportunities for unpacking the redemption story would come later. For the moment a red rope would do. “God has let down a rope––a blood-stained one––into the pit in which you find yourself. Take hold of it and he’ll pull you out!”

If indeed the rope by which the scouts climbed down was the very same one that Rahab dangled out her window, the implication is clear. The same red rope rescues both the lowly prostitute and the highly trusted scout on reconnaissance. Jesus’ blood rescues anyone willing to take hold of it!

Next time we’ll talk about making friends with prostitutes…

That Red Rope saves me everyday! I wrote about one such saving in the book:  The Other End of the Dark.

One Reply to “Rahab’s Red Rope”