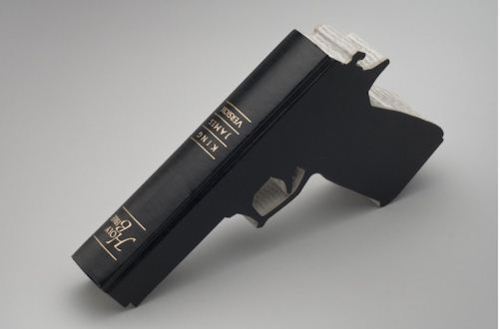 “…the letter kills but the Spirit gives life…” 2 Corinthians 3:6

“Weaponize” is a newly coined verb that means, “to convert for use as a weapon.”

A “Weaponized Bible” is a dangerous book used to justify many destructive and deadly practices.

Bible weaponizers don’t seem to read the Bible as a letter from God to tell us what he’s like and what he thinks of us. They seem to miss the friendship invitation in its message altogether. They read it through the lens of the American Dream, through their political party platform, or simply through whatever suits them at the moment, rather than through the lens of the love of its Author and their love back.

Of course, we’re all limited in our approach to God’s Word. We all have our own biases, our own prejudices that obscure its truths.

Our prejudices are often a reaction to some imbalanced theology wherein we create another off kilter belief in the other extreme. When we see God’s truth being compromised, it’s all too easy to dam up that particular flow, dig a u-turn, and divert the current in the opposite direction. From one extreme to another we go…

You get the point. We have so many competing presuppositions and emotions going on inside our heads that it’s darn hard to read the Bible objectively!

People of The Weaponized Bible use it as ammunition to prove their points and win their arguments. Instead, we should begin to see the Word more as seeds to plant in people rather than bullets to shoot at them! Seeds are for farmers and bullets for combatants. One is for planting and the other is for killing.

Bible scholars talk about the difference between “eisegesis” and “exegesis.” Put simply, one has to do with formulating our beliefs out of the Bible rather than imposing our presuppositions into it and making it mean whatever we want it to.

After admitting to himself that his prejudices, more than the Bible itself, determined his beliefs, one guy began to read it with fresh eyes and said, “My theories were attacked by a gang of ugly facts!”

Since the Bible is all about Jesus, throughout the Old and the New Testaments (Luke 24:27), I propose that the key to de-weaponizing it is to look for Jesus in the it. In everything you read, ask yourself––and I can’t believe I’m saying this––“What would Jesus do?” What would Jesus say, think, do in light of this passage? He is, after all, the center of it all. It’s not you, not America, not your political party, not your socioeconomic class, not your wants, or even your needs, but he’s the center!

17 He is before all things, and in him all things hold together.18 And he is the head of the body, the church; he is the beginning and the firstborn from among the dead, so that in everything he might have the supremacy. 19 For God was pleased to have all his fullness dwell in him, 20 and through him to reconcile to himself all things, whether things on earth or things in heaven, by making peace through his blood, shed on the cross. Colossians 1

I said above that the Bible can be used to justify many destructive and deadly practices, and it is particularly used this way when detached from Jesus.

Jesus said to Bible scholars of his day, “You search the Scriptures because you think they give you eternal life. But the Scriptures point to me! Yet you refuse to come to me to receive this life.” (John 5:39-40, NLT) He wasn’t telling them to stop studying Scripture or that it was getting in the way of their spirituality and they would be better off leaving it behind and followed him apart from the Bible. He was saying, “That book is all about me, so come to me, look for me in it, and through it the Spirit will show you how to live!”

Look for Jesus and de-weaponize your Bible today!

I think you’ll find more “seeds” than “bullets” in my book, The Other End of the Dark.

2 Replies to “The Weaponized Bible”