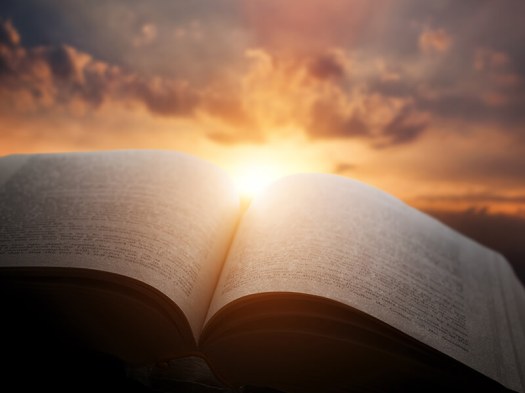 The grass withers and the flowers fall, but the word of the Lord endures forever. 1 Peter 1

In the last several posts we’ve been talking about critical thinking for Christians. (Scroll down for earlier ones if you’re interested.)

Here, I’d like to propose that the chief cause of poor thinking among followers of Jesus is our failure to consistently look through the lens of Scripture in formulating our moral, social, and political opinions.

While I personally take a pretty conservative viewpoint of the Bible I can’t stop now to address the various views of its inspiration. My point in this writing is how we look through Scripture, not so much how we look at it. That’s for another day.

Honestly, I am quite disheartened by how little consideration many believers, who take my same conservative view of Scripture, give to biblical revelation on issues that affect the way they think about the world. Either they don’t read it or they don’t apply what they read to their lives as exiles in this foreign land. They seem to be able to compartmentalize their lives in such a way as to justify a disconnect between what the Bible teaches and their moral, social, and political mores.

Wendell Berry said he didn’t know how or when “it became possible for people to commit their souls to God while participating in an economy dedicated to the swiftest possible extraction and consumption of everything it values in God’s world, with unlimited collateral damage to all creatures, humans included, that it does not value.” I suggest it happens every time we detach the Word from our worldview.

READ: “The Bible Is Your First Stop”

“Most Christian ‘believers’ tend to echo the prejudices and worldviews of the dominant culture in their country,” says Richard Rohr, “with only a minority revealing any real transformation of attitudes or consciousness. It has been true of slavery and racism, classism and consumerism and issues of immigration and health care for the poor.”

Some read the Bible only to find proof texts to back up their preconceived ideas. That’s how “Bible Weaponizers” justified the Crusades, slavery, and all manner of evil over the centuries. They have at their disposal any number of cherry-picked passages to justify support of policies that directly benefit them and their immediate neighbors at the expense of neighbors on the other side of the tracks. They’re more interested in ideas that fit their preferred notions than what is actually true. We need to do more honest, open-minded, worldview-influencing, values-developing, life-transforming reading of Scripture.

I can’t count the number of times I’ve written about sociopolitical themes, based on my potentially flawed understanding of Scripture, and invited people to rebut my ideas rooted in their understanding of the Book. Yet nearly all of the objections I’ve received have sidestepped the Word and employed either party platform mantras or personal partialities.

Since I’m not claiming to be right in all of my interpretations of Scripture I welcome counterpoints from a biblical framework. Since that seldom happens I’m left to think that I’m either right most of the time, or something more likely: Christians are either not familiar with Scripture or they go to someplace else for their politics and how to live in this world. They divorce their politics and social mores from what the Bible says, as though it has no relevance to such things. To me, that’s more than lazy, it’s lethal––to them personally and to the reputation of the Body of Christ in the world.

READ: “How the Bible Sustained Me in the Dark”

Rick Warren confessed that he was driven to re-examine Scripture with “new eyes.” What he found humbled him. “I found those 2,000 verses on the poor. How did I miss that? I went to Bible College, two seminaries, and I got a doctorate. How did I miss God’s compassion for the poor?” He said he prayed, “God, would you use me to re-attach the hands and the feet to the body of Christ, so that the whole church cares about the whole gospel in a whole new way—through the local church?” Lord give us new eyes!

We’re all looking at our world through some lens–– our fallen nature lens, our party’s platform lens, what our pastor or favorite Bible teacher says, or something else. But God gave us a Book to read for ourselves, and his Son to embody its message. Our primary loyalty lies with him. We’re Christians first, then Americans. With this in mind we must learn to process our preferences, policies, and patriotism through what he has chosen to tell us in his Word and empowered us to do through us by his Spirit.

“The statues of the Lord… are my counselors… a lamp to my feet and light to my path.” Psalm 119

I can’t recommend highly enough the seminal book by Ron Sider, written in 1978, Rich Christians in an Age of Hunger: Moving from Affluence to Generosity

Next time I’ll offer some concluding thoughts on thinking Christianly. Until then…