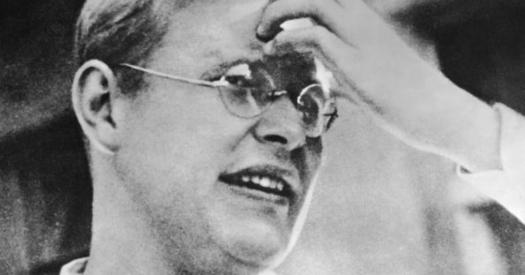 Barney: Welcome back to the show, Dietrich Bonhoeffer: Author, pastor, activist, and martyr.

Bonhoeffer: Thank you. Glad to be here.

Barney: We left our discussion last week comparing your historical context with our hysterical one––hysterical, not in the sense of humorous, but as in bizarre, even manic. Everyday we 21st Century Americans wake up to some new whacky thing our president has said or done before we’ve even had our first cup of coffee.

I’ll say it again, that while we can’t make a totally congruent comparison between your time and ours, I believe there are some similar elements. That’s why we’re consulting you. You’ve had first hand experience with what an untethered totalitarian leader can do a nation. Your Hitler and our Donald Trump may not have the same DNA, but from where I sit, they have at least the same blood type.

Bonhoeffer: You and many of your own contemporaries have noted that Donald Trump is not Adolf Hitler. This is true. But then, even Hitler wasn’t Hitler until he was.

Barney: Well said. Moving forward, in our last conversation you listed four different responses to the fascism of your time. Could you refresh our memories about those?

Bonhoeffer: We had perpetrators, collaborators, bystanders, and resisters with the regime. The perpetrators were Hitler, his goons, and those who worked with them in the commission of their crimes against humanity. Next, we had collaborators, who may not have personally worked in the death camps or served in the SS, but they supported the regime’s values. They came from all segments of our society, but it was the Christian community that backed the Führer and his hyper-nationalistic ideology that broke my heart most. Then there were the bystanders, who came from a number of different ideologies, but it was the apathetic Church that bears the greatest culpability. “Unto whom much is given much shall be required.” Resisters were people like myself and what we called the “Confessing Church” that stood up to the Nazis and their Third Reich.

Barney: Since this is where we left off last week, let’s unpack the idea of the bystanders a little. You say that the Church by and large had their head in the sand regarding what was happening all around them. What did that look like? How did they arrive at that place of apathetic inaction?

Bonhoeffer: In many ways our churches were just chapels for the dominant culture. Their denial of the danger that was all around them was epic.

Barney: Not to interrupt, but one of our theologians, Walter Brueggemann said of another time and place in history: “The target was the narcotized population of the elite who lived off economic surplus and who never noticed the sufferings that their policies and practices imposed on the vulnerable who sustained them by their labor.” Does that sound familiar?

Bonhoeffer: Yes it does. It reminds me of the famous quote by fourteenth century Saint Catherine of Siena, “Preach the truth as if you had a million voices. It is silence that kills the world.” The Church in my day seemed unwilling in most cases to break the silence of conformity to the ideology and atrocities of the Third Reich. Instead of standing up to the powers they preferred to sing songs and hug each other until their problems evaporated into thin air! I wrote at the time: “Silence in the face of evil is itself evil. God will not hold us guiltless. Not to speak is to speak. Not to act is to act.”

I also wrote, “One act of obedience is worth a hundred sermons.” But many German Christians were content to listen to more and more sermons without ever lifting up their eyes and doing something.

Barney: Tragically, it wasn’t until 50 years later when Pope John Paul II finally issued a formal apology for the failure of the Catholic Church to speak up and take action against the Nazis.

I’m reminded of something Martin Luther King, Jr. said, “Our lives begin to end the day we become silent about things that matter.”

Bonhoeffer: Because we couldn’t get much traction in the state Church, we founded what we called, “The Confessing Church” to oppose the government’s efforts to unify all churches under their own evil banner.

Barney: Mr. B, I think the Church in our day creates a false split between spiritual and social, and makes Jesus’ message into sweet, spiritualized syrup. Any gospel without feet isn’t the gospel! You called it “Cheap Grace” as I recall.

Bonhoeffer: Yes, I wrote that cheap grace “is grace without discipleship, grace without the cross, grace without Jesus Christ.” If the grace that Christians claim for themselves doesn’t change their ideals and their lifestyles it’s cheap and flimsy.

Barney: Another of our great pastor-theologians Tim Keller said, “If your politics don’t change when you start to follow Jesus, you might not actually be following Jesus.” Do you agree with that?

Bonhoeffer: Of course. Shockingly, I had dozens of debates with pastors who couldn’t see past the end of their noses. This is why I wrote: “Against folly we have no defense. …reasoning is no use; facts that contradict personal prejudices can simply be disbelieved — indeed, the fool can counter by criticizing them, and if they are undeniable, they can just be pushed aside as trivial exceptions.”

Barney: As I see it, the bulk of American Christians fit in this bystander category of yours. They don’t have time or energy to get involved with “political” issues. Some conveniently claim that God sovereignly uses whom he chooses to be leaders of nations. God is in charge, so why worry your head about it? Others’ favorite passage is Romans 13 about obeying the government at all costs. Don’t get in trouble with God by pushing back on what the government says. Some people are just too busy going to Bible studies and prayer meetings; focusing on how to supersize their incomes and making their middle-class lives as comfortable as possible.

Bonhoeffer: I wrote about Christians “fleeing from public altercation into the sanctuary of private virtuousness: and shutting their mouths and eyes to the injustice around them. . . Only at the cost of self-deception can they keep themselves pure from the contamination arising from responsible action.”

By the way, one of the worst arguments the Church uses to remain in those “sanctuaries” is something you alluded to, the God-always-gets-his-man-in-office argument. I doubt that if in hindsight your contemporaries took even the slightest glance at the history’s Hitlers, Mussolinis, or Stalins they would scrap such an unreasonable, to say nothing of unbiblical, idea.

Barney: It’s the head-in-the-sand Christians in our time that concern me most, Mr. B. They languish in spiritual obesity while the ideals of Jesus and many of the original principles upon which our country was founded are being shredded in Washington. From pulpits and on social media many even go so far as to support our president’s inhumane policies with their spiritual verbiage and cherry-picked verses from Scripture. Walter Brueggemann said, “Don’t tell Jesus that religion plays no part in the public arena or that faith is just a private matter between you and your Creator. He’ll think you weren’t listening.”

Why don’t we wind down this episode with the well-known poem by your colleague, German Lutheran pastor Martin Niemöller:

First they came for the socialists, and I did not speak out—

Because I was not a socialist.

Then they came for the trade unionists, and I did not speak out—

Because I was not a trade unionist.

Then they came for the Jews, and I did not speak out—

Because I was not a Jew.

Then they came for me—and there was no one left to speak for me.

Thanks again, Mr. Bonhoeffer for your wisdom and sacrifice for God’s dearly beloved Church. We’ll pick up our conversation next week and talk about your final point about how we ought to live as “resistors” in times of cultural, social, political, and spiritual turmoil. Until then.

5 Replies to “Bonhoeffer on Trump: A Postmortem Interview (Part 3 of 4)”