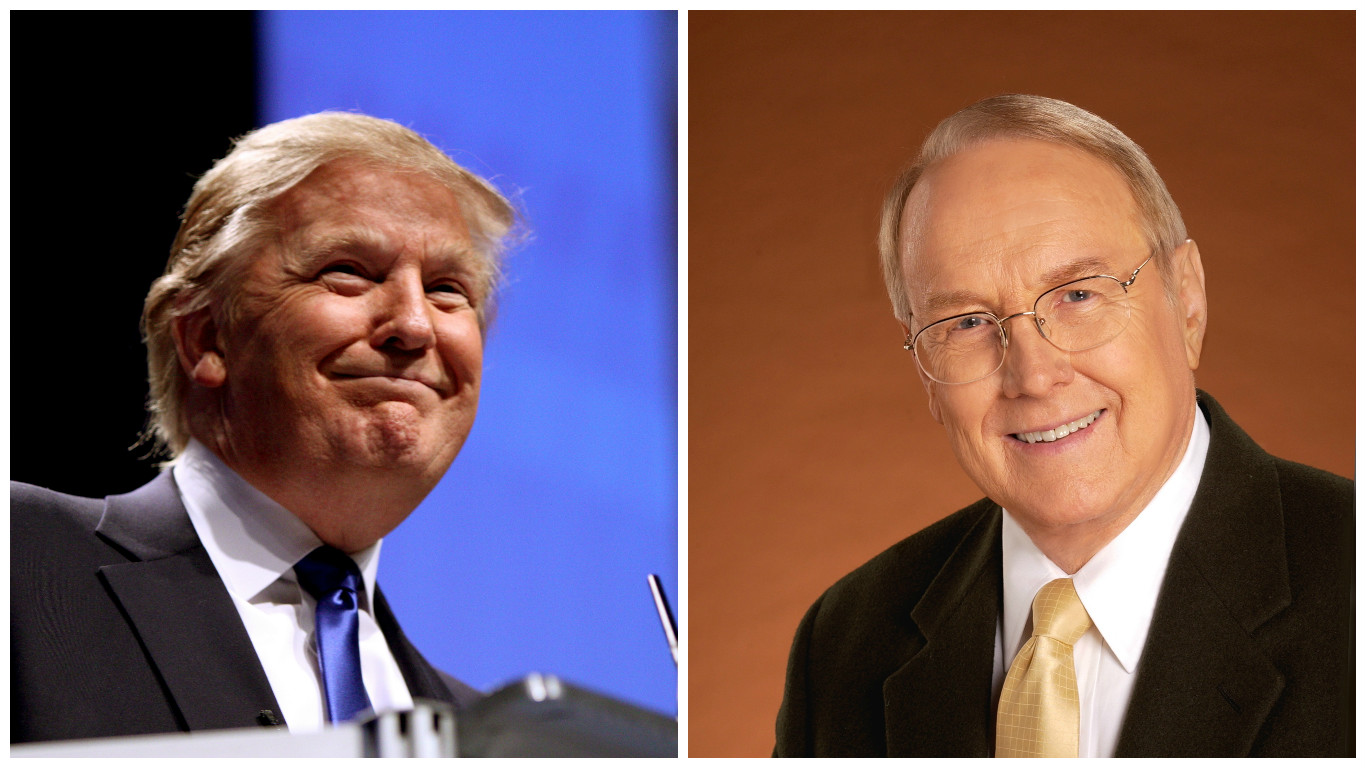 As beloved as James Dobson is to the evangelical community, predominantly among those of us with white skin and grey hair (if any hair at all), having the audacity to expose a flaw of his, I might as well claim that Smokey Bear was a pyromaniac or Billy Graham smoked crack. Most of my contemporaries and I read so many of JD’s books and listened to his every radio broadcast back in the day that we could not only quote him but sounded like him when we did! He was the  guru of Christian families for decades. He sure helped me be a better husband and father than I would have been without his input. That’s not saying much, BTW, since I wasn’t terribly good at to begin with. But I have no doubt that he was more helpful than not, at least in that area.

Yet when it comes to his politics, especially his view of Donald Trump’s immigration policies and politics of fear I think he may be more harmful than helpful these days. Some would go as far as to call his perspective downright “dangerous.”

In his newsletter Mr. Dobson details how, at the behest of (and most likely on the dime of) the White House he visited the immigrant detention center in McAllen, Texas. That should be our first clue that he couldn’t very well be objective, even if he were tempted to be.

Mr. Dobson drank the cool-aid way back during Mr. Trump’s campaign when he labeled him a “baby Christian” and counseled us all to have patience with him as he grows in the faith. From what I’ve observed the sanctification process is moving along quite sluggishly. While I’m not qualified to know who’s in and who’s out of the kingdom, I do know that there is a difference between an infant Christian and an insincere poser.

JD goes on to describe the disturbing conditions of the immense numbers of detainees as, “exhausted and ragged from walking hundreds of miles. Among them are large numbers of children, many of whom are unaccompanied by a caring adult.” “Some of the kids,” he says, “have been abused along the way… Many of them carry lice, scabies or other diseases. Currently, the facility I visited is experiencing a flu epidemic, and there are no additional beds on which to lie. Some of the women have been raped.”

He goes on to say: “The children looked traumatized and frightened. Tears flooded my eyes as I stood before them… My heart aches for these poor people.” Through a translator he told some of the detainees that God loves them and so does he. I have no doubt that his tears and love are genuine, if not lacking in wisdom and practicality. It’s his solution to the appalling circumstances at the border that I find woefully dim and absent of biblical foundation.

Speaking of the biblical foundations, according to a 2015 LifeWay Research poll the Bible appears to hold little sway when it comes to immigration. It found that 90 percent of all evangelicals say “the Scripture has no impact on their views toward immigration reform.” Supposed Bible-believing folk are not basing their views on such important social issues on Scripture! Sadly, Mr. Dobson seems to be no exception to that rule

Most shocking to me are his comments that are rooted in fear over facts, and worse, over faith:

“Many of them have no marketable skills. They are illiterate and unhealthy. Some are violent criminals. Their numbers will soon overwhelm the culture as we have known it, and it could bankrupt the nation. America has been a wonderfully generous and caring country since its founding. That is our Christian nature. But in this instance, we have met a worldwide wave of poverty that will take us down if we don’t deal with it. And it won’t take long for the inevitable consequences to happen.”

While there may be some truth in the refugees’ limited marketability, illiteracy, and ill-health, it’s a good thing Jesus doesn’t reject people for these reasons! JD’s claim that they will overwhelm our culture, bankrupt the nation, and inevitably take us down is overstated fear-mongering and absurd. He says our country has always displayed a generous Christian spirit, but apparently, in order to protect our portfolios that era has passed and God no longer requires it of us!

According to his statement, migrants and asylum seekers are nothing but uneducated, unproductive, disease-carrying criminals, the type of people we must shield ourselves off from. It’s the height of irony that the most prominent voice in the 1980s to get the Christian community “focused on the family” now claims that it’s only American families we should focus on. Central American families being torn apart seem to require less focus. Could it be that the Republican Party of “family values” only values certain deserving families? Gladly, his “heart aches for these people,” yet true compassion moves true believers beyond tears to action.

He goes on to make a bunch of disingenuous claims regarding such things as the gargantuan numbers of migrants from Middle Eastern countries, “fake families,” the “vast majority” who fail to report for court, and those who become “anchor babies.” He asserts “huge quantities of contraband, including all kinds of narcotics, flow into this country every day (over our Southern border)… Lawless gangs, such as MS-13, are also pouring into the culture.” Seems like sound bytes clipped from FOX News  or one of Mr. Trump’s stump speeches which have been debunked many times by nonpartisan fact-finding publications.

Then he leaps from his alternative facts and his claim to compassion for the suffering to the “urgently needed” wall of Donald Trump, who he claims “seems to be the only leader in America who comprehends this tragedy and is willing to address it. Those who oppose him do everything they can to impede his effort.”

He’s the only one who gets it! He couldn’t sound more like Mr. Trump if he tried, who more than once bloviated: “I alone can fix this!”

Mr. D weeps at the sight of their poverty and pain and proffers the solution of a wall to keep them out of our sight?! Let them suffer in their own countries where we can’t see them or hear their cries. We can’t be expected to pay for these kids living in fear and squalor. We have our security and prosperity to consider, to say nothing of a war chest to build!

So much for his family-first / pro-life position! More like our families and our American way of life.

Though I still love Mr. Dobson and appreciate all he’s done for families, in my opinion (for what it’s worth), dulled by his position as a fawning courtier of the president,  he damaged his credibility and his prophetic edge .

In contrast I recommend the following Christian ministries that are hard at work advocating and operating on behalf of immigrants, refugees, and asylum seekers:

I know that I’m touching a beloved evangelical icon here. But I’d love to hear from you, even if–– maybe especially if––you object to my assessment of James Dobson’s views on immigrants, the border crisis, or Donald Trump. All I ask is that you be civil and spend at least a little time thinking through what you offer here or on Facebook.

3 Replies to “Dobson on the Border”