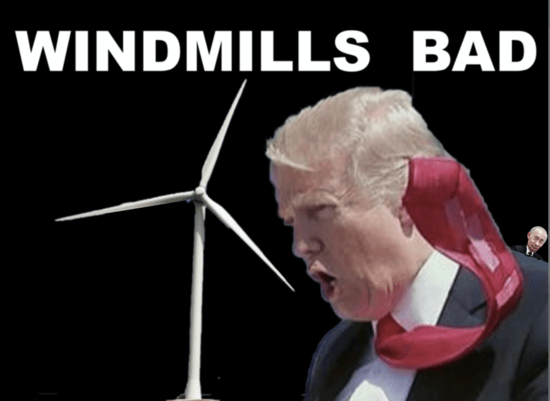 If anyone has an interpretation of this message in tongues we could sure use it to untangle this excerpt of President Trump’s speech in West Palm Beach, Florida on December 21st:

“We’ll have an economy based on wind. I never understood wind. You know, I know windmills very much. I’ve studied it better than anybody. I know it’s very expensive. They’re made in China and Germany mostly — very few made here, almost none. But they’re manufactured tremendous — if you’re into this — tremendous fumes. Gases are spewing into the atmosphere. You know we have a world, right? So the world is tiny compared to the universe. So tremendous, tremendous amount of fumes and everything. You talk about the carbon footprint — fumes are spewing into the air. Right? Spewing. Whether it’s in China, Germany, it’s going into the air. It’s our air, their air, everything — right? So they make these things and then they put them up.”

I’ve made an all out college try to decipher this from a number of angles: grammatical, linguistical, and even political. Even with my extensive experience at untangling difficult texts in the Bible I just can’t seem to get the gist of his thought here. There are nouns and verbs and punctuation marks, but they don’t seem to actually, you know,  go together.

He’s studied it “better than anybody” and yet he comes up with windmills spewing gases into the atmosphere––a “tremendous amount” of fumes mind you. (“Spewing!” Is that even a sentence?)

I have to admit, Mr. Trump does have a handle on air. It’s “ours and theirs. Right?” I can’t improve on that, so let’s move on to something much “lighter”:

This is what our president said in a Michigan rally (Are your ready for this?):

“We’re even bringing back the old light bulb. You heard about that, right? The old light bulb, which is better. I say, why do I always look so orange? You know why, because of the new light, they’re terrible. You look terrible.”

So, because he doesn’t look good in orange, LEDs are out! Makes perfect sense to me. We obviously don’t want our president to look like he’s been drinking too much carrot juice when he appears on Fox News. No doubt the station got rid of all their LEDs the moment he complained that no amount of makeup could make up for his discoloration and give him the dashing appearance he appears to want to appear in.

Though I’m not too keen on toilet talk myself, I guess it would be OK since the most powerful man in the world took time out of his busy schedule to make a proclamation about bathroom thrones.

Again in the Michigan rally:

“Now we’re doing it with a lot of other things. Uh, dishwashers, and uh, you know. I won’t tell you one of the things because every time I tell you they do a big number on it. You know the one I’m talking about, right? Sinks, right? Showers? And what goes with a sink and a shower?

At that point the crowd chanted: “A TOILET!” (Obviously a real classy group!)

So right then he does a flushing motion while saying something that sounds like “bah, bop,” and says:

“Not me of course, not me, but you. You. But I never mention that.”

On December 6th from the Roosevelt Room in the White House President Trump further opined on this lofty topic:

“People are flushing toilets 10 times, 15 times, as opposed to once. They end up using more water. So, EPA is looking at that very strongly, at my suggestion.”

I don’t know, but somehow it seems a little outside the job description of the leader of the free world to be having meetings about toilets, let alone the EPA looking at it “very strongly.” (I’m not at all sure that one can look at something “strongly,” but that’s beside the point.)

This passage has been on my mind lately. This might be a good time to share it.

“Anyone with good sense is eager to learn more, but fools are hungry for foolishness.” (Proverbs 15:14)

If verbal gaffs and clownish thought patterns were his only flaws, I would resist and desist from my criticisms. The fact is, these are just a few of the dozens of things that make Donald Trump the person in the White House most unqualified for the job in my lifetime, if not ever.

What strains credulity most for me are two things. The first is that this shows his complete disregard for the “house” in which God gave us to live and the science of climate change. At one point he actually claimed that the concept of global warming was “created by and for the Chinese in order to make US manufacturing non-competitive”! (No dignifying comment from me here.)

Later he said:“What I’m not willing to do is sacrifice the economic well-being of our country for something that nobody really knows.”  The future be damned, for as always it’s about the money! I’m not at all sure that he actually doubts the science of climate change. More plausible is that since there’s no chance that in his lifetime it will affect  his bottom-line or popularity, he just doesn’t care.

Taking the public’s time with contemptuous comments about toilets and lightbulbs is just his insulting way of showing his complete disregard for environmental concerns. Maybe let someone else work out the science of flushing and put that brilliant mind of his to stuff like the big picture of environmentalism, climate change, health insurance, North Korea, foreign countries’ election interference…?

The other thing that I can’t wrap my head around is that there are so many Americans (especially the Evangelical ones) who either cheer their heads off at his disjointed bellowing and Junior Highish toilet talk or pretend it doesn’t matter.  Maybe daytime fight-fest TV programs get a pass on vulgarity and senselessness because, well, their audience demands it. I don’t know.

What I do know is that we should expect something far better from the person occupying the highest office in the land––in the world! When you vote next year, I truly hope you will.