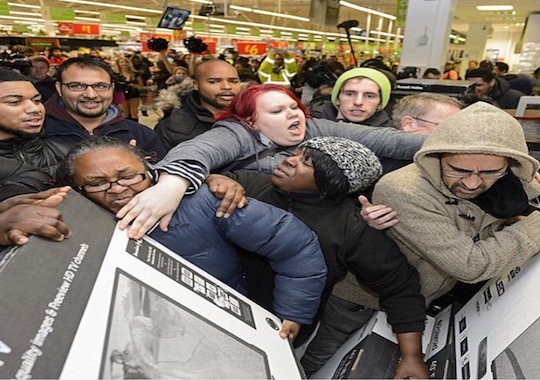 Come over here, Jesus, and bless me first! My brother can’t wait his turn!

Who would pray a prayer like that?! Most people wouldn’t have the audacity to say it out loud or say it in just those words, but I’ve heard a lot of prayers and observed a bunch of “Christians’” lifestyles that say just that. They seem more devoted to the philosophy of Ayn Rand than the teaching of Jesus, and are so interested in getting “theirs” they couldn’t care less if it comes at the expense of those who couldn’t reach theirs with a fireman’s ladder! Under the auspices of the American Dream, they retranslated the Golden Rule: Do to others before they do it to you.

It’s: Every Christian for himself (and herself)!

It takes no discernment to see it on the job, in their homes, and, yes, even––if not mostly––in their politics.

It’s nothing new. Jesus encountered and confronted this Me-First Spirit in Luke 12.

Two brothers were arguing about their inheritance and asked Jesus, who was in the middle of teaching a crowd, to jump into their drama and arbitrate, which he wisely refused to do. These brothers are in the presence of The Truth speaking and they interrupt him in hopes that he will leave teaching the needy masses and mediate their relatively petty dispute over money. As usual, he chose to address the heart of the matter, which in this case was greed.

They weren’t listening to his sermon; they presumed their issue was more important than the eternal realities he offered to everyone there that day. This is how greed works. It makes us the only people in the world that matter. It thinks only of itself and cares nothing for the needs of others.

Their parents’ bodies probably weren’t even cold and they’re in a pissing contest about money! How many families are shattered and scattered over money? It’s despicable that people care more about their fair share than their family, their neighborhood, or their country remaining in tact.

The brothers didn’t get the response they hoped for. They each expected Jesus to get him his fair share of money, instead, the Lord read their hearts and replied, Let’s talk principle here, the heart principle.

Yes, God fixes stuff in our lives. Yes he wants us to ask him for help. But that simply can’t be the extent of our prayers or the extent of his job description. Of course he cares about the intimate details of our daily existence, but he’s most interested in the heart of every matter.

He addressed the selfishness that drove those brothers who didn’t act much like brothers. They should have found a way to divide the money in some equitable way, instead all they could think about was their own cut. It’s not the dollars and cents that matter to Jesus as much as what’s percolating on the inside that makes us want to protect what we have and procure what others have at the expense of our relationships.

“Life does not consist in an abundance of possessions,” Jesus warned. In other words, we don’t have to be well off to be better off!

Paul proposed that greed is a certain form of idolatry, the worship of things.

Making our lives (or America) “great” has little-to-nothing to do with making our lives monetarily richer. Life isn’t about stuff. If anything, it’s about prohibiting our lust for stuff to drive a wedge between us and other humans.

Speaking of a wedge between us Jesus’ half-brother James, said to brothers and sisters:

“What causes fights and quarrels among you? Don’t they come from your desires that battle within you? You desire but do not have, so you kill. You covet but you cannot get what you want, so you quarrel and fight.” (James 4:1-2)

“Watch out! Be on your guard against all kinds of greed!” Greed is insidious, like a snake, stealthy like the devil. Watch your step lest out from under his rock the snake strikes.

Peter says there are some people whose hearts are “trained in greed.” The term he uses for “trained” is from the one from which we get the words gymnasium or gymnastics. It’s as though some people go to the gym and work out to have stronger greed muscles! I fear that in our culture we’re being unwittingly trained by the rich and famous, the people who reached the top of their game, and now act as role models for the rest of us.

“Watch out! Be on your guard!”

We’ll continue unpacking this passage next time when we talk about how “It’s Better to Give Than to Gather.” In meantime, happy Christmas shopping. And don’t hurt anyone in the Walmart toy aisle fighting to get what’s yours!

5 Replies to “Every Christian for Himself!  ”