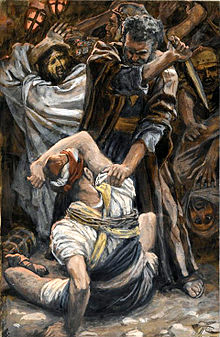 This is a case of a “sinner in the hands of an angry Christian”! Not good. A lot of people think Jesus is pretty cool, but his Church––not so much. Go figure! Could their aversion have anything to do with how we approach them by cutting off communication with them? (Pun intended.)

After what Peter did, Malchus couldn’t very well “hear” the good news, at least not from him. Let’s just say that an outreach strategy that leaves people bleeding out of the side of their head is not a particularly good one.

Though not the last, or even the worst, of Peter’s impetuosity, it was his most theatrical. Assault with a deadly weapon is not included the apostle’s job description! For the time being he would be God’s poster boy for how not to influence people toward Jesus.